Keith's Fantasy Club is a Chinese toy company founded in 2012 that specializes in third-party Transformer products.

A Chinese toy company founded in 2012, Keith's Fantasy Club specialized in third-party Transformer toys. Their first toy was release in 2013 was called Rhinohorn, it was an homage to Generation 1 Ramhorn.

Keith's Fantasy Club commonly recolors it's toy molds in a variety of colors, releasing the recolors as either varients of the existing characters or a new characters. Often times the recolors are released as exclusives to specific stores and conventions.

In August 2014 they announced they were changing the name of the company. Initially it was to be changed to Toys X-Press, they later settled on Keith's Toy Club. 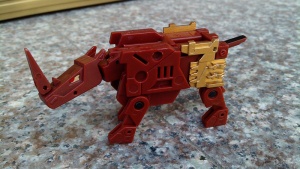 The Cybercast podcast for December 21st, 2013 discussed Resound, Reverb and CST-D01A in the news.[1]

The Good Morning, Cybertron! podcast for January 14th, 2014 discussed the rumor of Keith's Fantasy Club insect microcassettes in the news.[3]

The Radio Free Cybertron podcast for May 2nd, 2014 discussed Keith's Fantasy Club Powered Convoy and Shining Magnus homages in the news. The host thought it was weird, but he wanted it.[4]

In July 2013 Keith did an interview WikiAlpha editor and Retro Robot Radio host Mathew Robert Ignash. Here is a copy of that interview:

WikiAlpha: How long have you been a Transformers fan?

KEITH: I was a young fan to Transformers since I was in elementary school. back then, I was with my friend play some KO transformers toys, because in my small town we didn't have chance to buy real Hasbro toys.also we are poor then.

WikiAlpha: What is you favorite Transformers TV series or comic?

KEITH: The only TF TV/Movie which made me feel happy is 98 episodes and THE MOVIE, in 80's .

WikiAlpha: How long have you worked in toy design?

KEITH: I work with toy design by 2011, and after that some great designer and artist joined my group. I not alone now.

WikiAlpha: How long does the a new toy take to design?

KEITH: For a deluxe class we work about two month.

WikiAlpha: Which of your toys designs are you most proud of?

KEITH: Nothing so far, but it should definitely have one soon.

WikiAlpha: If you had unlimited money and time, what character would you most want to design a toy for?

KEITH: All the triple changers, I think.

WikiAlpha: What is your favorite third-party Transformers from another companies?

WikiAlpha: Can you tell us anything of your next project?

KEITH: We will finish the cassettes, Dinocassettes is upcoming soon. And Skybyte.

WikiAlpha: Are there any other toy lines besides Transformers that interest you?

WikiAlpha: If anyone wants you to make an exclusive toy, where should they contact you?