Muscules is a fictional character and third-party Transformer homage to Stranglehold made by Play With This Too. He is a heroic professional wrestler.

Muscules is a fictional character created by Play With This Too as part of their Lost Protectors series. He is a heroic wrestler. He wears a Babel Bracer which translates all languages and Tachyon Telegraph which can send and receive transmissions with an interplanetary range.

According to Play With This Too's Rik Alvarez Muscules has a daughter named Thunderous, who is the same figure with a new head.

He has a BMOG manager named Ray Mant the Manta-Ger and a Tech Drone named R-Count who turns from weapon into mechanical rhino.

Muscules is an homage to Transformers Stranglehold. He was initially developed under the name Strongarm. Early concepts for the toy used the same forearms as Goldminer. His helmet was inspired by that used by Transformers Pretenders Starscream.

Rik Alvarez announced Muscules as a Kickstarter exclusive in a Cybercast podcast interview in November 2014.

In an interview on the TFYLP podcast in December 2014 Rik announced that Head Shots Vol. 5 were his battles helmets, that he had a daughter named Thunderous and his favorite wrestling move was a strangle hold.

In February 2015 Play With This Too released images of the prototype for Desolataur, which included parts used on Muscules.

Barbaricles and Muscules were among the stretch goals for the unsuccessful Lost Protectors Kickstarter campaign. They were to be unlocked if the campaign raised at least $180,000.[1]

In August 2015 Play With This Too released images of prototype parts for Jetstrike, which included parts used on Muscules.

Eventually Play With The Too intended to release a helmet and Tech Drone who turned into a rhino for Muscules that were more inspired by Stranglehold.

In April 2018 Play With This Too posted a picture of Muscules in their Twitter feed with the message "Coming sooner than you think.....!"

In April 2018 Rik Alvarez posted on Facebook and Twitter a picture of Muscules and hints he would be trying Kickstarter again.

The TFYLP podcast for December 12th, 2014 had Rik Alvarez on briefly as a guest. They talked about Desolataur, Muscules and premiered Head Shots Vol. 5.[3]

The Star To Star Toys News podcast for December 23rd, 2014 discussed D-Throne, Desolataur and Muscules in the news.[4]

The Repacked Podcast podcast for December 29th, 2014 interviewed Rik Alvarez of Play With This Too. They talked about Simon Furman and Christopher Dahlberg joining the team and about the figures for Desolataur, Muscules and Thunderous as well as Head Shots Vol. 5.[5] 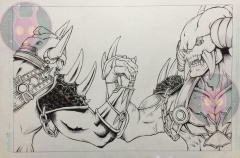 Muscules is a space wrestler and wants to be an intergalactic hero. He has a Tech Drone companion named R-Count.

According to the biography for Ray Mant the Manta-Ger, the BMOG is Muscules oldest friend, manager and promoter.

According to the biography for Boneyard, Boneyard wears a helmet plugged from the his of Muscules father, Testostros.

According to an interview with Trent Troop and Rik Alvarez Muscules wants to join the Lost Protectors team.[8]

A 1:12 scale articulated figure with interchangeable head and limbs. He has numerous 5mm connector ports. Comes with two sets of hands (open and closed), helmet, Skullbuster flail and championship belt.
Muscules is intended to interact with the Head Shots Vol. 5 set by being placed on his Skullbuster flail. The Bruiser helmet is from the battle of Muscules vs. the Jerks of Regulon 7. The Secton helmet is from the battle of Muscules vs. the Guys at the Laundry Mart. The Tark helmet is from the battle of Muscules vs. the Dudes From That Planet.
Muscules has the same design as Barbaricles and Mean Bean Oaktree.
Muscules shares some parts with Baron Tuskador, Bitemark, Bloodbath, Bloodsoaked, Calaminous Haagenti, Catastropheles, Cloudstrike, Coleopterous, Concept, Count Tuskules, Desolataur, Dungheap, Faststrike, Flarestrike, Gladiat-Ore, Impirator, Jetstrike, King Adder, Lord Tangent von Tuskuleser, Manvil Forgehead, Prince Carnos, Rawbat, Sir Fangramore LeVenomous, Sir Pythanore, Spine-FCKR, Stormstrike, Terrortops, Titanic Triceratops XD, Tri-Gorr and Viper Squire.