Faststrike is the name of a fictional character and third-party Transformer homage to Thundercracker created by Play With This Too for their Lost Protectors series. He is a member of the Striker Fleet.

Faststrike is part of the Lost Protectors line by Play With This Too. He is a member of the Striker Fleet under the command of Flarestrike. He has superhuman speed. He wears an Aegis armor which is capable of interplanetary flight thanks to its Cosmoglider wings, which can also be changed into Cosmoshield that can deflect almost any attack. His Battle Shroud mask protects his hearing and vision from overload by enemy attack. He wears a Babel Bracer which translates all languages and Tachyon Telegraph which can send and receive transmissions. His weapons include a Strike Scepter capable of attacking with incredible speed and Megaton Mace which delivers massive impacts. He has a Tech Drone squire named R-Buke who turns from robot to jet.

Faststrike's design is also influenced by the shell of Pretender Starscream. Faststrike's biography was written by J. Graham and Trent Troop. R-Buke's name was suggested by Mathew Robert Ignash.

In July 2015 Play With This Too announced the design for the Tech Drones would be more like Microns.

In August 2015 Play With This Too released images of prototype parts for Jetstrike.

Faststrike was one of the twelve figures available as a reward for the unsuccessful Boneyard & Jetstrike Action Figures Kickstarter campaign, which began in September 2015.[2]

His title was created by Mathew Robert Ignash.

The TF Insane Asylum podcast for September 15th, 2015 interviewed Rik Alvarez, who revealed the the updated render of Faststrike for the second Kickstarter.[4]

The Retro Robot Radio show for September 19th, 2015 talked about Faststrike, Stonebreaker and Wrecktifier in the news.[5]

Faststrike is a member of the Striker Fleet. He wears a living Aegis battle suit powered by the primal forces of the universe. It grants him enhanced strength, durability, longevity and the ability the fly, as well as having numerous weapons. His suit also provides breathable air and protection from harsh environmental conditions including under water and the vacuum of space. He has a Tech Drone companion named R-Buke.

Genetically constituted from the finest cell-lines from the two carefully-chosen Gralvall nobles, Faststrike was engineered to lead the Strikers of Gralvall against the Armada of Granite. This twenty year endeavor was meant to create the perfect knight, physically, mentally, and psychologically flawless. The results were, according to the project lead "within the margin of error."

What lurked in those margins was fear. Despite the gene-weavers' best efforts, Faststrike retained the ability to feel crippling terror, a flaw that emerged when he merged with his Aegis armor. Something in the bonding process unlocked that primal instinct and, without decades of experience controlling and understanding his fear, Faststrike was stripped of his rank for cowardice. Reassigned to the terraforming project on the planet Xarth IV, Faststrike began again. He gained the trust and respect of the scientists on the terraforming project. Eventually, they developed a means for him to control his fear, an amygdala-suppressor integrated into his Aegis that would block fear impulses before they began, at least for a few hours at a time. He was ready to reclaim his lost birthright as a warrior. He returned to the Strikers and regained a place in their ranks by undergoing their ancient rite of bravery, the Trial of White Steel.

After seven years on a peaceful colony world, however, Faststrike finds himself wondering if the destiny he regained in the one he truly desires. The only hope for his restless mind comes from whispers from his Aegis, dreams and impressions that tell him that Jetstrike is the key to his purpose. Taking this to mean he must hunt down and recapture Jetstrike and his comrades he joined Flarestrike's crusade to recapture them. Still, a nagging doubt in his mind tells him that this interpretation is merely within the margin of error. 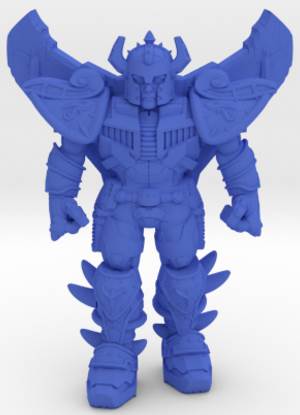 Jetstrike 35mm figure from Prize Inside in blue as Faststrike

A 1:48 scale figure of Jetstrike by Prize Inside. Available on their Shapeways store in a variety of colors. This version of the figure has Boneyard style shoulder pads.[6]

A face for Titan Masters that looks like Jetstrike's human head in helmet by Prize Inside. Available on their Shapeways store in a variety of colors.[7]

A face for Titan Masters that looks like Jetstrike's robot head by Prize Inside. Available on their Shapeways store in a variety of colors.[8]