Professor von Joy is a friendly robot who turns into a sports car. He is a distant relative of Royal-T.[1]

In some books he is depicted as a Renegade GoBot and also being gigantic.

Baron von Joy was chosen as the goofiest GoBot name by Topless Robot.[3]

Baron von Joy was named among the "5 GoBots That NEED to be in the Proposed GoBots Movie" by Kevin Hellions at underscoopfire.com.[4]

A distant relative to Royal-T, the fun loving baron was hired by the royal family to secretly protect their son from harm. 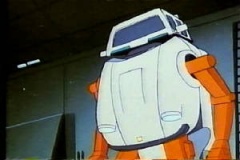 Professor Von Joy in Challenge of the GoBots

Professor von Joy appeared in Challenge of the GoBots episode 9, "The Fall of GoBotron."

In episode 15, "It's the Thought that Counts" Cy-Kill, Cop-Tur, Crasher, Geeper-Creeper, Pincher, and Snoop attack a lab, but it is defended by Leader-1, Professor von Joy, Blaster, Dozer, Dumper, Road Ranger, Scooter, Scratch and Turbo. Although the Guardians win the battle, an accidental backfire from Professor von Joy's weapon allows the Renegades to escape.[5]

In the episode 34 "Scooter Enhanced" Scooter and Small Foot join Nick and A.J. to watch a car stunt show which is attacked by Crasher, BuggyMan and Fly Trap. Small Foot fights Buggyman and defeats him, but the Renegades gain the upper hand. The Guardians are rescued by Leader-1 and Turbo who arrive in Power Suits. Cy-Kill vows to gain Power Suits for the Renegades. Scooter decides he needs more firepower, so he has Professor von Joy remove his damaged holo projector in favor of a blaster unit. Screw Head, Bad Boy and Cop-Tur are sent to attack Unecom bases and distract the Guardians while Cy-Kill, Crasher and Scorp attempt to take the suits from the Guardian Command Center. Small Foot and Scooter are able to delay the Renegades until Leader-1 and Turbo return to chase away the Renegades. Realizing he was a better Guardian with his holo projector, Scooter has it reinstalled.[6]

Professor von Joy was featured in the 2016 Ask Vector Prime story Echoes and Fragments, set during the events of The Transformers: The Movie. The manipulations of the evil Gong and Sideways resulted in various GoBots swapping places with characters during the events of that film. Professor von Joy took the place of Wheeljack in the plot. He was killed at the battle for Guardian City.[7]

Professor von Joy appeared in the episode 32 story "The RoGuns of Mars".[10]

Baron von Joy appeared in the TFcon 2013 comic story "Lost World, Lost Mind" where he assisted Rest-Q in performing neural scans on Roswell. He is also seen in a flashback operating the new modifier on Roswell and Van Guardian with the help of Bug Chomp and Staks.[11]

A release of Machine Robo MRDX-07 Porsche 930 Turbo.
A super GoBot toy that becomes a 1:37 scale car. Baron von Joy came with a gun that could be mounted on his head on held in a hand.