Pincher is a fictional character from the GoBots series. He is a Renegade Monster GoBot who turns into an alien jet who was introduced in 1984.

Picher is a Renegade GoBot voiced by Peter Cullen[1]

Pincher was one of the names in a word find that had to be solved to win a copy of the Challenge of the GoBots video game from Your Sinclair magazine.[2]

Pincher shares his name with a Transformers character, an Autobot Pretender.

Like most GoBots, Pincher has numerous abilities because of his robotic body. He does not age, can survive in space and is super-humanly strong and tough. He can fly in robot mode and project energy blasts from his hands. His body heals quickly when supplied with energy. He can turn into a monster jet.

Challenge of the GoBots

In the Challenge of the GoBots episode "It's The Thought That Counts" Cy-Kill, Cop-Tur, Crasher, Geeper-Creeper, Pincher, and Snoop attack a lab, but it is defended by Leader-1, Professor von Joy, Blaster, Dozer, Dumper, Road Ranger, Scooter, Scratch and Turbo. Although the Guardians were winning the battle, an accidental backfire from Professor von Joy's weapon allows the Renegades to escape.[3]

Pincher appeared in episode 26, "The Quest for Roguestar".[4]

In episode 43, "The Seer" Cy-Kill and his minions Block Head, Cop-Tur, Crasher and Pincher kidnap a young blind psychic named Shaun Roberts and his mother from Unecom with the help of the human traitor Major Benedict. Cy-Kill uses the brain stormer to read the boy's mind. Shaun and his mother are rescued by Leader-1, Scooter, Turbo and Van Guard. An overload by the brain stormer robs the boy of his psychic powers and he is returned home safely.[5]

In the film GoBots: Battle of the Rock Lords Pincher was among the Renegade GoBot forces who aided the Rock Lord Magmar on the planet Cordax.

Pincher was featured in the 2016 Ask Vector Prime story Echoes and Fragments, set during the events of The Transformers: The Movie. The manipulations of the evil Gong and Sideways resulted in various GoBots, Rock Lords and Starriors swapping places with characters during the events of that film. He was one of the monster GoBots on the planet Antares III, taking the place of the Quintessons and Sharkticons of Quintessa in the story.[7] 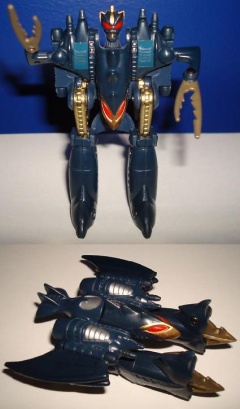 A release of Machine Robo Falgos by Bandai.
Some versions of Pincher came packaged with a free 3-D GoBots sticker.