The RoGuns of Mars is a fictional story in the Transformers: Renegade Rhetoric series episode 31. Written in 2015, it retroactively took place in an unaired second season of the Challenge of the GoBots animated series.[1]

Professor Von Joy invents two more RoGuns, who team up with the Secret Riders on Mars.

Q: I heard there was a fourth RoGun. Is this true?

Cy-Kill: Fourth and fifth, yes. Apparently Professor Von Joy created two more, Scope and Shotgun, and upgraded all their language circuits to enable them to more easily communicate with others. Oh, yes, there's quite the merry little RoGun clan. 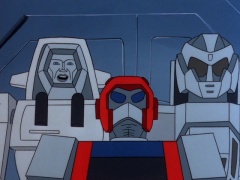 Throttle, Tri-Trak and Twister in the Challenge of the GoBots episode "The Quest For New Earth"
We discovered this when the Secret Riders decided to prove themselves by attacking our base on Mars. Armed with the RoGuns, they had more firepower than we had anticipated. Fortunately for us, we had made an alliance with the savage Bars Barkas and his Barkhon clan, and were able to capture the interlopers. All would have gone well, had not Throttle managed to befriend Bars Barkas' spindly son, Losa and teach him that there are other paths to greatness besides combat. Losa and Bars Barkas kicked my forces off the planet, much to my chagrin.