Dear Cy-Kill, Have you ever met future versions of your and your enemies' faction like where the Autobots have the Maximals and Decepticons have the Predacons?

Cy-Kill: Not precisely, though that does recall an incident to mind.

During one of our raids on a high-energy physics research facility, Crasher and Turbo found themselves chasing each other through a particle accelerator at top speed. Little did they know that an experiment was set to begin at precisely that moment. The machine hummed to life, and the next thing they knew they were driving through a lush, well-maintained park!

They were, of course, baffled, but soon humans in flying police cars descended upon them. Crasher raised her fists, but a booming megaphone informed her that it was the year 2085. Earth and GoBotron had become the founding members of the League of Worlds, encompassing hundreds of star systems. Imagine her revulsion when they told her that the Renegades had seemingly forged a truce with the Guardians, and that there was no need for violence.

Crasher and the Guardian lout were taken directly to a ceremony in Washington, D.C., headed by president Jake Hunter, to commemorate the rebuilding of GoBotron. Crasher, being a good Renegade, had seen enough and attempted to disrupt the ceremony. She soon found herself tackled by the future counterparts of myself and Fitor. She struggled under their weight, until future me whispered for her not to "blow it for everyone". Turbo was welcomed back to the Guardians with open arms by future Leader-1 and Zeemon, even as Crasher was escorted away.

Then the time came to use the refined Astro-Beam to permanently relocate to GoBotron for the next, even more important ceremony. With GoBotron rebuilt and the war seemingly over, it was time to reverse the GoBot process for of its inhabitants and restore them to organic GoBeing bodies. Turbo found this notion disturbing, for they would be far more physically vulnerable in their original bodies, but future Scooter laughed off the idea. Vulnerable to what? They were at peace. But Turbo just couldn't leave well enough alone, and stalked off. He attempted to look in on Crasher, the only other GoBot who could understand his consternation, who my future counterpart had assured the Guardians was being locked up "until she came to understand the new realities of the 21st century." 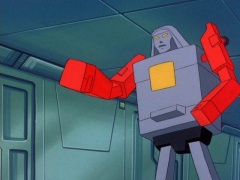 Block Head in Challenge of the GoBots

He made his way to the Renegade embassy on GoBotron, where Destroyer and Block Head turned him away. Annoyingly persistent, he snuck in a back entrance and discovered that Crasher was not behind bars at all, but had been informed that the peace was a ruse. The Renegades were preparing to strike as soon as the Guardians permanently converted back to their original organic humanoid forms. He tried to flee, so future me dispatched future Cop-Tur and Weird Wing to hunt him down. They shot him and he exploded...

...or so they thought. In reality they had simply blown up a shed full of the demolition charges that had been used in the final repairs of GoBotron and he had dodged underground. Tragically, none of the future Renegades realized this. They and future Crasher watched as Leader-1 was given the honor of being the first GoBot to be returned to his original state. Each of the Guardians seemingly followed suit, ending with Zeemon. At that point, future me ordered the inevitable attack. Sadly, warned by Turbo, the entire ceremony was a mere holographic charade, and the future Renegades rushed into an ambush. Soundly defeated, future me sounded a retreat but vowed that there would never be peace while Guardians reigned supreme. Crasher was captured, and future Professor Von Joy reversed the particle accelerator accident and sent them back to our present. Only minutes had past from the time they left, so Cop-Tur and I grabbed the restrained Crasher and withdrew.

Leader-1 asked Turbo what happened, who replied that it was great to be back in the good old 20th century. Scooter cautioned him him not to let slip any details about the future, lest they damage the time-stream, and Turbo fired off a salute. "Yes, sir, future Supreme Guardian Chancellor Scooter." Scooter was flummoxed, asking if he was really destined to be Supreme Guardian Chancellor, and everyone laughed.