Primal Prime is a fictional character from the Transformers series introduced in 2000. He is a Maximal leader who was created by the alien Vok and become co-leader of the Wreckers. He would later be joined with the Maximal Ape-Linq to become the Autobot Sentinel Maximus.

Primal Prime's tech spec would set out his origin: he was created from the remnants of the control suit Quickstrike used to control Optimus Primal in the Beast Wars episode "Master Blaster". A literal patchwork of both Maximal and Autobot technologies, Prime is nonetheless determined to do the heroes of old, including Optimus Prime himself, proud. However, Prime has trouble comprehending the forces involved in his own origin, his only weakness.

Primal Prime's motto is identical to that first used by original Optimus Prime. He is depicted as standing about 18 feet tall.

Primal Prime is featured in a the Botcon comics series "Primeval Dawn" which take him away from the Beast Machines setting and establishes him on Earth shortly after the end of the Beast Wars.

Shortly after the Maximals and Predacons leave Earth, the evil Tarantulas resurfaces, planning to steal the Autobot Matrix of Leadership and destroy the Autobots and Decepticons. To stop him, the alien race known as the Vok send the binary spark of Tigerhawk back to Earth to separate into Tigatron and Airazor. They then set out to create a new emissary.

Aboard the buried Ark, the Vok discover an abandoned control suit used by the Predacon Quickstrike to manipulate Optimal Optimus Primal's body. Using the Matrix of Leadership contained within the nearby dormant Optimus Prime, and the Transmetal Driver, they make the suit into a Maximal. This Maximal is Primal Prime, a robot with all the knowledge of the Matrix and characteristics identical to those of Optimal Optimus. His creators give him a number of titles, including: the Prime of Justice, the Living Matrix, and Emissary of the Vok - the last of which had originally belonged to Tigerhawk. Gathering a force of warriors to his aid, Primal does battle with the forces of Tarantulas.

Due to the series' cancellation, this story was never resolved, but it is known that Primal Prime took the Matrix of Leadership into himself to safeguard it, only to have it ripped out by Tarantulus. Revived by the Vok, he leads his forces into the final battle against Tarantulus, defeating him and destroying his forces.

After that conflict, Primal and his crew head for Cybertron. However, they arrive to find the planet under the despotic rule of Megatron and his Vehicon horde, along with their virus weapon. Fortunately, they meet up with the last remnants of the Wreckers task force: the Maximal scientist Apelinq and the ancient Autobot Rodimus Prime. After being inoculated for the virus by Apelinq, who ends up lost in time, Primal Prime assumes command of the Wreckers. He keeps this role even when Apelinq returns, adding several Decepticons, such as Skywarp and Cyclonus, to the ranks of the Wreckers.

Primal Prime and his fellow Wreckers come to the aid of Optimus Primal, who is under attack by Vehicon forces. After a subsequent meeting with the Oracle, Prime and his forces depart Cybertron to seek allies, preparing to meet at the Nexus. The Wreckers, Mutants and Dinobots arrive on Cybertron and are sent on missions by the Oracle. [1] 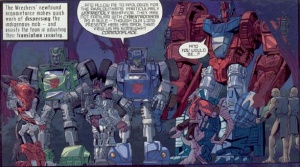 However, they first have to overcome the forces of the diabolical Cryotek, a former mentor of Megatron. They fail in a number of instances due to the origin of the Oracle as a Quintesson program to fool the Transformers. This leads to the loss of several crew members after their ship was sabotaged, as well as the theft of an alien artifact known as the Divine Light. Primal broods over this loss for a time, but is galvanized back into action by Alpha Trion. He then meets with an exiled Quintesson named Al-Badur, who tells the Wreckers of the Quintessons' deep involvement in Cybertron's history.

Issue #16 of the Transformers Collectors Club magazine features Primal Prime Apelinq and Cryotek on the cover.

According to the Transformers: Universe series, Primal Prime later combines with Apelinq into the robot, Sentinel Maximus, in an attempt to stop Cryotek. The unreleased Wreckers comics gave the origin story, in which Primal Prime and his crew returned to Cybertron after learning of a Quintesson invasion. Realizing that their mission from the Oracle had been a Quintesson ploy, Primal Prime led his team against Cryotek and his forces, only to be struck a mortal wound with Apelinq. The two were then joined together by the Matrix and Apelinq's Virtual Interlink into Sentinel Maximus. This stronger hero would subsequently battle Cryotek before being called away to serve Primus in other universes.[2]

Sentinel Maximus would subsequently be pulled from the mainstream reality into the Cybertron-reality by Vector Prime in an effort to prevent Nemesis Prime and Ramjet from destroying Primus. He later went on to battle Unicron himself alongside Omega Prime, before being recruited alongside an alternate version of Primal Prime to join the Transtech's Convoy, a group of various Matrix bearers from across the multiverse. Another alternate Primal Prime was featured in Transformers: Hoist the Flag!, again as leader of the Wreckers where he expelled Devcon for questionable methods and was then outraged by Ginrai's decision to recruit him to the Knights of Cybertron. His tech spec indicated that he was an unconfident leader chosen to lead an interstellar mission.

A redeco and slight remold of Beast Wars Optimal Optimus.

A redeco of Titanium Optimal Optimus. Seen on display at the Hasbro booth at BotCon 2007. Although this toy is incapable of assuming a gorilla form, Primal Prime has never been depicted as assuming this form. [3]

A blue and red redeco of 10th Anniversary Optimus Primal; was the Botcon 2014 customization class figure.