Sentinel Maximus is a fictional character from the Transformers series introduced in 2004. He was created as Botcon exclusive.

Due to production delays, Sentinel Maximus ended up with two different biographies. One features him as the combined form of Wrecker leaders Primal Prime and Apelinq, created in a desperate attempt to stop the evil Cryotek. The two were united by the power of Apelinq's Transfer Interlink and the Matrix, and they engaged a superpowered Cryotek after he and his Quintesson allies invaded Cybertron. The two were both pulled into a dimension of nothingness following their battle, and Maximus was taken away to a meeting with Windrazor, who would serve as a guide to him.[1] The other describes him as the guardian of Cybertron, created by Primus, effectively making him a counterpart to The Last Autobot, a character who appeared in the last two issues of Marvel's Transformers comic book. In either version, he is assisted by a Mini-Con named Ape-Linq/Hyperlinq.

Sentinel Maximus appeared as one of the major characters in the Balancing Act comic produced by the Transformers Collectors Club through IDW Publishing.

When the Heralds of Unicron Ramjet and Nemesis Prime escaped from their dimension with the intent of resurrecting their master Unicron by draining Primus' energy with the Dead Matrix, Alpha Trion and Vector Prime were able to use the dimensional instabilities caused by the black hole created by Unicron's death to find an ally - Sentinel Maximus. However, having barely arrived in their dimension, they were attacked by Ramjet and Nemesis Prime. Although Sentinel Maximus and Vector Prime drove them off, Alpha Trion and Vector Sigma were damaged.

Although Trion was placed out of harm's way, they soon faced a new threat - the mindless Dark Scorponok who was lured into finishing off Alpha Trion. Valiantly holding off the giant Decepticon, Maximus was badly wounded by Scorponok's venom before the chamber's autoguns blasted the mad Decepticon. Barely recovering in time to face Nemesis Prime and Ramjet, the weakened Maximus let Nemesis Prime past him into Primus' spark core. Unexpected help arrived, however, in the form of Omega Prime, who then split into Optimus Prime and Ultra Magnus and soundly defeated the mad Herald. With Nemesis Prime forcibly put into stasis and Ramjet defeated by Vector Prime (who is then transported to Earth), Maximus assumes command and ordered that the Dead Matrix be locked away - unaware that he was being observed by Soundwave.

Soundwave subsequently stole the Dead Matrix and threw it into the black hole, reviving Unicron, who took a nearby planet as his new body. Unicron attacked Cybertron again in the midst of a Mini-Con civil war, duelling with Sentinel Maximus and Omega Prime. The battle was inconclusive, but Unicron was driven away by Primus himself. Sentinel Maximus recovered - only to receive Optimus Prime, bearing word of Vector Prime's death in battle. 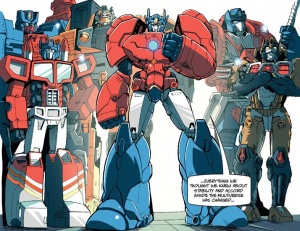 Sentinel Maximus appears in Invasion Prologue by Fun Publications.[2] He would later be established as a member of the Convoy, a group of Matrix bearers/leaders from various realities assembled by the Transtech to deal with various Offworlder threats.

A remold of Armada Overload with Rollout.