Rewind is the name of two fictional characters from the Transformers series. They are both Autobots who turn into microcassettes. The original Rewind was a heroic character in the Generation 1 series. The second Rewind was his evil mirror universe counterpart.

Rewind's biography painted him as the Autobots' memory man - he can remember just about anything. Unfortunately, he fills it with pointless trivia, and is hence slightly defunct when it comes to important matters.

As a member of the Autobot communications sub-group Rewind frequently worked with its other members - Blaster, Eject, Grand Slam, Raindance, Ramhorn and Steeljaw.

Profile: Rewind is the Autobot trivia expert. His memory banks have an amazing capacity to process and store data that is of virtually no use to anyone. Ask him what is the ratio of carbon to ditryllium atoms in laser pistol polish or what is the capitol of New Jersey and he'll answer without hesitation. But ask him something important, like what is the recommended way of disarming a photon-cannon drone, and he'll probably be of no help at all. Still, sometimes his knowledge of arcane facts proves to be an immense help, and Rewind is much appreciated by his fellow Autobots for it. They just wish that he would turn his attention away from encyclopedia collections and toward the war with the Decepticons more often. (By the way, the answers to the above questions are: 3,623 to 1; Telemark VI on the planet Ganzvort, Trenton on the planet Earth; and tell him his fusion line is unplugged.)

Abilities: Rewind's internal light-matrix data storage system enables him to record and store an almost infinite amount of data. His recall from memory of any individual datum is virtually instantaneous. He can also release some of the light energy and turn himself into a blinding beacon. In robot mode, he uses an adhesion rifle, which shoots a quick-drying stream of glue that unbreakably bonds metal to whatever it touches.

Weaknesses: Rewind sometimes suffers from severe cerebro-circuitry overloads, what Earthlings would call "headaches," when he attempts to absorb too much data too quickly. He is incapacitated and helpless when this happens, and he can take hours, even days to recover. He's even been known to blow out some circuitry, which usually requires major repairs.

According to Dan Fleming in Powerplay: Toys As Popular Culture, Blaster and his cassettes represents a guardian of more primitive heroes, as well as the hidden power of technology.[1] 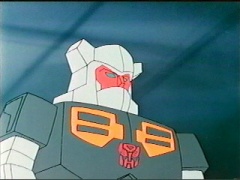 Rewind in The Transformers

Rewind first appeared as one of Blaster's warriors in The Transformers: The Movie, where he defended Blaster's communications tower from the Decepticon cassettes.

His most prominent role came in the episode, "Forever is A Long Time Coming". In this episode, Rewind, Blaster, Ramhorn, Blurr and Wreck-Gar are transported to Cybertron's past via a Quintesson time window. Rewind's information allows the Autobots to identify where they were in the timeline. He aided the prehistoric Autobots in defeating the Guardian Robots, thus keeping the original timeline intact. In this episode Rewind shows a love for exact timetables, when Blaster remarks that the asteroid they were going to investigate had been there for millions of years Rewind comes up with a date to last year, month,day, hour, and minute.

In episode 78, "Madman's Paradise", Spike and Carly hosted a banquet for a visiting ambassador. Daniel got bored and wandered off. Grimlock followed him, and they fell into a lost chamber where Quintessons banished their criminals to other dimensions. They slipped through to the sorcerous other-dimensional realm of Menonia, and were tricked into fighting on the Red Wizard's side, only to find out that he was the Quintesson criminal, who overthrew the Golden One. Ultra Magnus, Blaster, Eject, Rewind, Ramhorn, and Steeljaw followed - thanks to Rewind deciphering the ancient writing on the walls. With Blaster's amplification abilities, they help the Golden One use a counterspell to defeat the Red Wizard. With the help of Perceptor, the Autobots and Daniel are returned to Cybertron.

Rewind did not appear much after this in the US series. However, he was in the Japanese series, Transformers: The Headmasters. When Blaster was killed during a one on one confrontation with Soundwave, the Autobot cassettes were left without a leader. They salvaged his body and were able to reconstruct the body. Blaster was reformatted into Twincast.

Rewind was among the many Autobots who congregated in a secret base during the "Age of Wrath", when the recently-returned Megatron's Aerospace Extermination Squadron covered the planet Cybertron, capturing countless Autobot heroes and sending the remnants of the army underground.

Although Rewind would not appear in the US Transformers comic, he appeared in the UK "Space Pirates" arc. When the Quintessons attacked Autobot City and killed Blaster and the rest of its inhabitants, Rodimus Prime came to investigate. However, when he lost the Matrix and reverted to Hot Rod, he decided to use Blaster's cassettes, including Rewind, to fend off the Quintessons while he reactivated Metroplex.

Rewind was released in 1986 in a set of cassettes designed to accessorize the Season 2 Autobot Blaster. He was released in package with the yellow lion Steeljaw. Rewind shares a mold with the Autobots Eject, Flip Sides and Rosanna.

The Shattered Glass version of Rewind is an evil mechanical animal trainer who works for Blaster.

Rewind appeared in Solar Requiem, where he escaped Earth's moon to the Earth and confronted Ratbat.[3]

Rewind appeared in Another Light. With the Autobots captured by the Knights of Cybertron, Rodimus Prime returned to challenge Nova Prime. When Cybertron started to transform into Primus, Rodimus ordered the Autobots to abandon the planet.[4]