Ramhorn is the name of four fictional characters from the Transformers series. The first is a heroic Autobot who turns from a cassette to robotic rhinoceros introduced in 1986. The second Ramhorn (initially parsed as Ram Horn) is an evil Predacon general who turns into a giant rhinoceros beetle or drill tank introduced in 1997.

He is part of the mini-cassette Autobot team and takes on the form of a rhinoceros.

As a member of the Autobot communications sub-group Ramhorn frequently worked with its other members - Blaster, Eject, Grand Slam, Raindance, Rewind and Steeljaw.

Profile: If you value your life, don't touch Ramhorn - or anything that belongs to him. He's extremely territorial and has a nasty hair-trigger temper. Handle his spare fuel supply pods and he'll smash you. Do anything that he can even remotely construe as a threat to him and he'll smash you. Anger smoulders within him, unexplained and untempered. Other Autobots have tried to reason with him, discover what it is that fires his misdirected aggression, but to no avail. The mystery of his madness remains. The only clear truth about Ramhorn is this: The best way to deal with him is from a distance.

Abilities: In rhinoceros mode, Ramhorn's charge is virtually unstoppable. He can knock a train off its tracks or upend an 18-wheeler with one blow. His horn can rip through an 18 inch-thick tempered steel wall. His armor is resistant to extreme heat and cold, and most artillery fire. In cassette mode, he can release a powerful vibration that can destroy any equipment into which he's inserted.

Weaknesses: Ramhorn is relatively vulnerable to a variety of electromagnetic jamming. Such an attack can severely reduce his mobility or even freeze him while in rhinoceros mode.

Ramhorn first appeared as one of Blaster's warriors in The Transformers: The Movie, where he defended Blaster's communications tower from the Decepticon cassettes.

He appeared in the episode, "Forever is A Long Time Coming". In this episode, Rewind, Blaster, Ramhorn, Blurr and Wreck-Gar are transported to Cybertron's past via a Quintesson time window. He aided the prehistoric Autobots in defeating the Guardian Robots, thus keeping the original timeline intact. (Strangely, Ramhorn had the power of speech in that episode, and only made normal rhino-like sounds for most of his other appearances)

In episode 78, "Madman's Paradise", Spike and Carly hosted a banquet for a visiting ambassador. Daniel got bored and wandered off. Grimlock followed him and they fell into a lost chamber where Quintessons banished their criminals to other dimensions. They slipped through to the sorcerous other-dimensional realm of Menonia, and were tricked into fighting on the Red Wizard's side, only to find out that he was the Quintesson criminal, who overthrew the Golden One. Ultra Magnus, Blaster, Eject, Rewind, Ramhorn, and Steeljaw followed, and using Blaster's amplification, they help the Golden One defeat the Red Wizard. With the help of Perceptor, the Autobots and Daniel returned to Cybertron.

In "The Quintesson Journal" he was a part of the Autobot team that recovered the Quintesson's recording device.

He also had a small part in "The Ultimate Weapon", teaming with Steeljaw to ram Galvatron's cannon mode.

He later appeared in "Call of the Primitives" as one of the Transformers "Primitives" (animal themed Transformers like the Dinobots and Predacons) summoned by Primacron to battle his creation Tornedron, but was deactivated by the energy creature. He was revived when Grimlock defeated the creature.

Ramhorn did not appear much after this in the US series. However, he was in the Japanese series, Transformers: The Headmasters. When Blaster was killed during a one on one confrontation with Soundwave, the Autobot cassettes were left without a leader. They salvaged his body and were able to reconstruct the body. Blaster was reformatted into Twincast, whose bodies were identical, except for the fact that his later form was blue instead of red.

Ramhorn was among the many Autobots who congregated in a secret base during the "Age of Wrath", when the recently-returned Megatron's Aerospace Extermination Squadron covered the planet Cybertron, capturing countless Autobot heroes and sending the remnants of the army underground.

Although Ramhorn would not appear in the US Transformers comic, he appeared in the UK "Space Pirates" arc. When the Quintessons attacked Autobot City and killed Blaster and the rest of its inhabitants, Rodimus Prime came to investigate. However, when he lost the Matrix and reverted to Hot Rod, he decided to use Blaster's cassettes, including Ramhorn, to fend off the Quintessons while he reactivated Metroplex.

In the Transformers Universe limited series, Ramhorn's profile picture erroneously displayed a Decepticon sigil instead of the Autobot sigil on his body.

A 6-pack which includes Blaster, Eject, Perceptor, Ramhorn and Steeljaw.

Now, with a space in the middle of his name, Ram Horn was the name given to one of the three Predacons who turned into Tripredacus.[3]

The biography for General Ramhorn in the 2016 BotCon stories about his origin which include the possibility that he is the original Autobot Ramhorn or that he defeated that Autobot to take his name.

Ramhorn is as subtle as a variable voltage harness to a data port. Stubbornness, violence and ignorance are among his many "charms". While believing in the greater schemes of the Council, Ramhorn bores easily and does not play the long game and derives enjoyment from irritating others with his impatience. Ramhorn refuses to acknowledge his origins so as a result many stories about. Some say he was an early Cybertronian, some say he was an Autobot, some say he killed an Autobot and stole his name... One theory, which tends to keep the troops in line, is that he clawed his way out of The Pit itself, being too ferocious to be contained, dragging a number of ancient and wicked Sparks along with him. Many loyalists believe this and many believe they were forged in the same fire as him, making his tropps incredibly loyal despite Ramhorn's brash and incredibly blunt personality.

In "The Agenda Part 1", the Tripredacus Council ordered Agent Ravage to follow the transwarp wave in order to capture Megatron and eliminate any witnesses.

As the crew of the Darkside fled Cybertron with the Golden Disk, Predacon Secret Police Agent Tarantulas was on board decoding information from it. While his boss—Megatron—wasn't watching, Tarantulas contacted General Ram Horn and updated him on the disk's status.

The Tripredacus Council ordered Magmatron to assure that no knowledge of the transwarp wave reached the Maximals. When their Agent failed at his task of re-capturing Megatron, the Council sent Magmatron to complete the mission.

Ram Horn had a biography printed in the Beast Wars Sourcebook by IDW Publishing.[4]

Ram Horn is a basic sized toy that transforms into a maroon rhinoceros beetle. He has a dual-bladed claw weapon. He transforms into the arms of Tripredacus. He was redecoed into the Maximal Motorarm.[5] 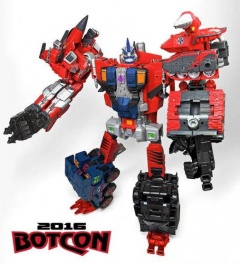 Ramhorn appeared in Solar Requiem, where he escaped Earth's moon to the Earth and confronted Slugfest.[7]