Astrotrain is the name of three fictional characters from the Transformers series. The original Astrotrain was introduced in 1985 as a Decepticon Triple Changer who could take the form of a locomotive or a space shuttle.

Creating confusion is his specialty. As a Triple Changer, can switch from space shuttle to train to robot almost instantaneously. Thrives on foes' panic and fear. As shuttle, travels at 20,000mph in orbit, up to 50,000mph out of orbit... can launch weapons and satellites. Carries cargo. As a train, top speed is 400mph, range 1700 miles. As robot has great strength, carries powerful ionic displacer rifle.

In the The Transformere episode "Prime Target" the big game hunter Lord Cholmondeley captured a secret Soviet jet, leading to panic of possibly war. Cholmondeley then set his sights on the ultimate trophy, the head of Optimus Prime. In order to lure Optimus in, Cholmondeley captured the Autobots Tracks, Bumblebee, Jazz, Beachcomber, Grapple, Blaster and Inferno. Windcharger and Huffer were able to avoid being trapped. When Cosmos learned of the location Cholmondeley was keeping the captured Autobots, Optimus Prime accepted Cholmondeley's challenge to meet him alone. Although interrupted by the Decepticons Astrotrain and Blitzwing's attempt to ally the Decepticons with Cholmondeley, Optimus defeated the big game hunter and freed the Autobots. Cholmondeley and the stolen jet were handed over to the Soviets by the Autobots as punishment for his actions.

In the second season episode of the animated series called "The Gambler" evcon attempted to collect a bounty on Dirge, Astrotrain and Ramjet.

Astrotrain first appeared in Marvel's The Transformers series in the "Target 2006" arc of the UK comics. Along with the other Triple Changers, the three Insecticons, Dirge, Thrust, Ramjet and Macabre, they are the Decepticons' most feared killers and must be taken out before a major Autobot uprising can take place. Megatron inadvertently scuppers the plan by summoning the Insecticons to Earth.

Astrotrain first appeared in the U.S. in issue #29. He was sent to Earth with Blitzwing and Octane to retrieve a crashed shuttle that was carrying fuel for one of Ratbat's operations. The shuttle's pilot was infected with Scraplets—sentient micro-robots that devour metal—and the dying pilot accidentally infects them. After battling with Blaster and Goldbug the Autobots also become infected. Goldbug finds the cure is water, but Blaster refuses to let Goldbug spray them, reluctant to save the Decepticons. The Scraplets then merge into one huge creature. Goldbug cures all four Transformers and lets the heavily armed Decepticons deal with it. The three Triple-Changers escape with their cargo.

Astrotrain is part of Ratbat's Earthbound forces, battling Scorponok's Decepticons when they arrive, and later the Autobots. He is then deactivated by the Underbase-powered Starscream over Buenos Aires. He appeared in the UK Earthforce stories as part of the Decepticons of Megatron and Shockwave's forces. Astrotrain made a final appearance as part of Galvatron's forces in this alternate universe, in which Unicron has destroyed Cybertron, and Galvatron and the Decepticons rule Earth.

Astrotrain made an appearance in the Decepticon forces under the command of Megatron in issue #7 of the Marvel Generation 2 comic series, in a story called "New Dawn." Megatron lead his Decepticons against Jhiaxus' second generation Cybertronians near the moon of Tykos. The Decepticons were defeated and Megatron left injured, presumed dead, but swearing revenge.[1]

Defeated by the Autobots, Shockwave was forced to set up a new secret headquarters in the wastelands of Cybertron, with Astrotrain, Blitzwing, Dirge, Ramjet and Thrust under his command. Shockwave completed work on his new warrior, Sixshot but Megatron's return, accompanied by with three clone warriors and the Predacons, was able to defeat Shockwave. Shockwave was kept alive, but restrained and his loyal warrior Blitzwing was decapitated by Razorclaw, while his other warriors joined with Megatron in his plan to invade the Earth.

In the third crossover between G.I. Joe and the Transformers published by Devil's Due Publishing, Astrotrain appears as part of the Decepticon air attack on the Autobot Capital City led by Sixshot, but is driven off by Omega Supreme. After Omega's defeat he attacked Autobot civilians, but is beaten into the ground by Optimus Prime.

According to the biography printed in the Transformers Collectors club comic, Megatron spent nearly 10 years rebuilding Astrotrain on Earth. Soundwave used human agents to recover parts of Astrotrain from the floor of the Atlantic Ocean. Once online, Astrotrain was sent to find other deactivated Decepticons. Astrotrain serves faithfully, but is bored with his work and hated humans. Although his time in orbit was his only get-away, he became angry when he discovered a human space station; the humans were invading his only refuge. He destroyed the station and hundreds of satellites. 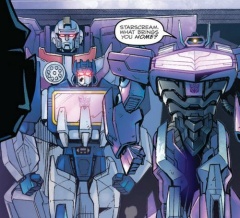 Astrotrain, Soundwave and Shockwave in Transformers: Robots in Disguise by IDW Publishing

Astrotrain appears in Transformers: Robots in Disguise by IDW Publishing.

Astotrain appeared in the TFcon 2009 convention poster by Alex Milne in the form of his Henkei Deluxe toy.[2]

A recolor of Classic Deluxe Astrotrain.

A set of stickers for Generation 1 Astrotrain.[4]

A recolor of Generations Titans Return Voyager Sentinel Prime with a new head.

A remold and recolor of Armada Jetfire. This toy was repurposed as Shattered Glass Astrotrain.

Shattered Glass Astrotrain is a remold of Armada Jetfire with 4 Mini-Cons.

Astrotrain appeared in the fiction Dungeons & Dinobots, a text based story from Fun Publications. Astrotrain and his Micromasters were used to transport supplies and energon rods from the Arch-Ayr fuel depot to the Deception base at Darkmount.[5]

In Do Over he among the crew of the Nemesis, which followed the Autobot's Ark to Earth. When the Nemesis was uable to close in on the Ark Astrotrain and his partners were sent to disable its weapons.[6]

In Eye in the Sky the Decepticons lamented the fact that they did not know where Astrotrain and his Mircomaster partners had gone down on Earth. The Decepticons could use their help in defeating a human militaty satellite the Autobots had gained control of and were using to take over the Earth.

In Blitzwing Bop the Decepticons recover Astrotrain after he is found frozen in the Antarctic.

A remold and recolor of Armada Jetfire. This toy was repurposed as Shattered Glass Astrotrain.

An "Ask Vector Prime" post revealed that a version of Team Bullet Train had it's members' shells reformatted into Decepticons by Megazarak's Robo-Smasher, with Railspike's form becoming a version of Astrotrain. As a result, he became one of the three components of Dominus Trannis, but later perished at the hands of Defensor after the Autobot leader failed to revive the Bullet Train Autobots and was forced to destroy Dominus Trannis.