Zarak is a fictional character from the Transformers series. He is the Nebulan Headmaster partner of Scorponok.

Despair and isolation are all that remain in his wake. Believes the poor should be exploited, the weak oppressed, and the noble corrupted. Others' pain is his sole pleasure. In scorpion Mode, tail shoots 100,000 volt electric bursts, has twin pulse blasters, claws can crush mountains. In defense base Mode, has over-the-horizon radar, communications center, anti-aircraft sonic cannon, repair bay, construction bay; semi-autonomous armored interceptor with dual photon cannons that patrols the base perimeter. In robot Mode, has fusion-powered anti-gravity gun. Binary-bonded to Lord Zarak, leader of the evil Nebulans.

In the English cartoon, Scorponok and Lord Zarak only appeared in the three-part episode "The Rebirth", comprising the entirety of the show's fourth season and concluding the American run of the original cartoon era.

Lord Zarak was the supreme leader of the Hive, an evil dictatorship that ruled the planet of Nebulos and saw the populace as their slaves. Each of the eleven Hive members possessed telepathic/telekinetic control over machines, which they controlled worldwide to subjugate the Nebulans, moving to a subterranean city as their powers developed. But as the strength of their minds grew, the Hive's bodies withered away and became useless, to the extent that some members of the group apparently no longer even possess organic forms, only robotic shells which house their brains. Zarak himself retains his body, but despite his muscular build, may be paraplegic (he is never seen walking without his Headmaster suit) and possibly blind in one eye (one eye is always drawn either shut or solid white).

With the arrival of the Transformers to Nebulos, and the fusion of a group of Autobots and Nebulan rebels into Headmasters, Zarak masterminded a scheme to duplicate the process with Decepticons. Unable to control the Decepticons directly with their mental powers, the Hive were able to subdue them with their own machines and force them into the scheme, striking a deal to create both Headmasters and Targetmasters. With his fellow Hive members binary bonded to the Decepticons, Zarak then turned his attention to himself, reconstructing the Hive's entire subterranean city into a giant Transformer, Scorponok, to which he then bonded himself as Headmaster partner. Scorponok emerged in the midst of a battle between the Autobots and Decepticons, capturing Arcee, who was currently holding the key to the Plasma Energy Chamber, and departing for Cybertron with the Decepticons on board. They key was subsequently used by Galvatron to open the Plasma Energy Chamber while Scorponok transformed to his robot mode and battled with Fortress Maximus. Escaping into space with the Decepticons aboard as the chamber opened, Scorponok was struck by a tendril of plasma energy, and sent hurtling off into the depths of space. In the end, it became clear that Zarak had intended to take leadership of the Decepticons for himself, though the series ended just as this was hinted at.

Zarak's voice is supplied by Stan Jones. Scorponok speaks only one line of dialogue - "Autobots! Die!" - provided by Stephen Keener. In the Japanese exclusive cartoons Zarak is instead a smaller robot who eventually becomes Scorponok.

Zarak appeared in the 1987 Corgi Book story Swamp of the Scorpion.[1]

In the US Marvel Comics Transformers comics, Zarak first appeared in the four-issue Headmasters mini-series, which introduced the new breed of warrior to the Transformers universe. In this series Scorponok was leader of a troop of Decepticons who were summoned to the planet Nebulos by Lord Zarak, a corrupt politician who was intent on removing Fortress Maximus and other Autobots who had previously settled on the planet.

Scorponok was among the Decepticon troops who first met with the Nebulans led by Zarak in the Transformers UK Annual 1998 story Doomsday for Nebulos.

As the Headmaster and Targetmaster processes escalated the Transformers' conflict on Nebulos, Zarak realized that their war threatened to destroy the planet and its peaceful inhabitants. To that end, he orchestrated events leading to both Autobot and Decepticon forces travelling to Earth.

Upon their arrival, (in issue #38 of the main Transformers series) Scorponok's group continued its rivalry with the Autobots led by Fortress Maximus and Zarak's former political rival, Galen. After succeeding in killing Galen (Maximus's Nebulan partner), he was shocked to see the Autobot commander controlled by Spike Witwicky, the human he tortured hours earlier.

Scorponok appeared in a story called "Pretender to the Throne", where he created the first six Decepticon Pretenders. [2]

In issue #49 (part 3 of "The Underbase Saga"), Scorponok met up with the Earthbound Decepticons controlled by Ratbat. The meeting was arranged by Starscream, privately in the hopes of playing the two groups against one another. According to his wishes, the alliance between Scorponok and Ratbat broke down after Scorponok's disapproval of Ratbat's Speciesist beliefs about humans (as Scorponok was now partially human himself) and witnessing the capture and torture of Buster Witwicky (ironically, the brother of the human he earlier harassed). When Scorponok's attempt to leave was met with an assault by the Predacons, that was all his troops needed to wage a civil war against their fellow Decepticons. The battle came to a close as Autobots responded to a distress signal (attached to a freed Buster) left by Starscream and again as Starscream's Underbase-powered fury was waged against them all.

Scorponok added the Earthbound Decepticons to his own forces after he destroyed Ratbat. His ship now destroyed, he quickly set up a new base of operations beneath the New Jersey swamps. Morale was low due to their recent failures. It only worsened when he accepted Starscream back into their ranks, after the recently rebuilt Decepticon had again assaulted them (this time being controlled by Megatron). In issue #69, "Eye of the Storm", Mindwipe and Triggerhappy (key members of Scorponok's inner circle) abandoned him after his re-inclusion of Starscream—a final straw for the two, injured by Starscream's previous assaults. They were then forcibly recruited by Shockwave, Starscream and Ravage to take part in an attempted coup. 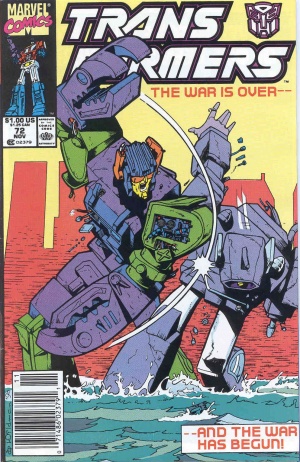 The coup came to a close when Scorponok attained the surrender of Optimus Prime just prior to the climactic battle with Unicron. During that battle, Zarak's courage wavered and he began to flee until realizing that honor demanded him to stand and fight.

He was destroyed by Unicron during one final attack, after which he was told by Optimus Prime that he had "done good".

While that would be the last the US comics saw of Scorponok, he put in one additional appearance in the UK comics. In a possible future (told from the perspective of an aged Rodimus Prime) Scorponok battled against Shockwave and Megatron for leadership of the Decepticons. Losing, and attacked by the Micromaster Air Strike Patrol, Scorponok surrendered to Hot Rod – only to manipulate him and his comrades into defending a human settlement from the Decepticons while he escaped. This would be his last appearance in the Marvel timeline.[3]

In the Tranformers: Timelines story Transformers: Hoist the Flag!, the character of Olin Zarak-grandson of the original-was introduced.

"Ask Vector Prime" expanded on alternate versions of Zarak from different realities, including Majin Zarak and others fused with Scorponok. Various incarnations were known to have different names, with the nickname of Mo often being short for such names as Mortilus, Monzo, Mogahn, Modrex, and Mongo. Different Zaraks have also held extensive titles, such as Lord Peer Mortilus Olin Zarak III, Servant of the Realm, By Grace of the Spheres, or Dr. Mortilus Quixotol Zarak, Doctor of Higher Mechanical Engineering. In one reality he was Lord Kord Zarak, while others featured him having the given name of Scorponok or Dante. Vector Prime also commented on any possible link between Zarak and the member of the Guiding Hand who shared his name in some realities, and suggested that-if any connection existed at all-it could be indicative of Zarak's following Mortilus down the path of darkness or that Mortilus continued to exist through Zarak but sought return to Cybertronian form through the Headmaster process. [4]

Perhaps the most dreadful incarnation of Zarak was known as Zarak Maximus, a monstrous hybrid Transformer who was once Mortilus Zarak. In his reality the Autobots and Decepticons were driven from Nebulos but left behind a number of casualties, including Scorponok and Fortress Maximus. Losing political office due to scandal, Zarak attempted to seize power by having scientist loyal to him fuse the remains of these two titans to create a monstrous new body that he was then binary-bondeded to. However, remnants of Scorponok and Maximus' warring personalities remained in the fused form, and eventually drove Zarak Maximus into a mad rampage that ravaged the planet. However, when he came upon his daughter Llyra and her son Olin, enough of his old self remained to make him recoil in horror and depart the planet, never to return. His solitary journeys through space eventually crossed paths with Bio Ranger Iga, who convinced him that the city of Micropolis held the Zodiac Energon that could restore his sanity, leading Zarak to attack the city. Zarak was driven off, but became the first member of Iga's Thirteen Great Demon Generals. [5] [6] This was intended to depict the giant Transformer featured in the Japanese Micromaster commercial. [7]

Zarak is mentioned in the biography for Headrobots Toxin and Stronghold. Zarak turned to Toxin when he needed someone to copy Stronghold's technology.

Scorponok is the second-largest toy from the original Transformers toyline, slightly taller than Trypticon, and second only to his opposite number, Fortress Maximus. Originally, his Tech Spec statistics were printed upside down, resulting in a grossly inaccurate representation of his abilities (suggesting, for example, that his Strength was merely 3). Later production runs of the toy bore modified statistics - though they were again incorrect as they were consistently two points lower than those revealed by plugging Lord Zarak into the chest meter. (This may be due to the blue line of the tech specs card being printed in yet another inverted form -- mirrored, as opposed to upside down.)

An unlicensed reissue copy of Scorponok was released by Cattoys in 2013. It is nearly identical to the original toy.