Harley Robo is a fictional character from the Machine Robo series. He is a member of the Battle Clan who turns into a motorcycle. He was introduced as a toy in 1984, but did not appear in fiction until 1986.

Harley Robo is a heroic Machine Robo of the Battle Clan who turns into a motorcycle. He was a teacher in Yamalin City when the city was attacked by the Gandora. He joined the forces opposing the Gandora because they threatened his students. Because of his mechanoid nature he does not need to breath oxygen and is resistant to cold, but is vulnerable to intense magnetic fields. His weapon is the Ionoid Star Cannon.

Harley Robo first appeared helping defend the city from a Gandora attack in Machine Robo: Revenge of Cronos episode 24, "Gather All Machine Robo". He told Rom Stol that they were running low on ammunition.[1]

Harley Robo appeared in episode 25, "Scramble! Land Commander 5" as one of the residents of Yamalin City. 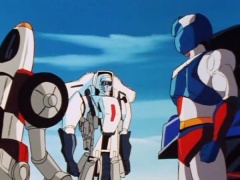 Harley Robo appeared in episode 27 of, called "The Magic Mountain Knight Maskrock". In the episode Harley Robo was a teacher in Yamalin City whose school was targeted by an attack by the Gandora. Although he attempted to evacuate the students, some were still in the building when a missile containing rust poison gas went off. Harley was part of a Yamilan City volunteer group lead by Rom Stol that went to retrieve the cure for the rust poison gas. Phantom Robo gave Harley Robo a lift when they flew off for their mission.[2]

Bike Robo, Harley Robo and Tough Trailer were among the reinforcements Blue Jet brought in to help save Rubyman from the Gandora in episode 35, "The Secret of the Jewel People".[3]

Harley Robo was one of the central characters in episode 37, "Critical Moment - Land Commander 5". The Varigale-X attacked a nearby city to draw Rom Stol out. Harley Robo escaped and headed to Rom and the others but was possessed by Grujious on route and used him to ask Rom for help and he obliged, taking Blue Jet, Rod Drill and Pro Truck Racer to the city. Garudi then lead a large assault on the Battle Base and Land Commander 5 was sent out in response. Harley Robo was left in the base with Min and advanced on her menacingly. Land Commander 5 was soon damaged while Grujios - controlling Harley Robo still - was able to also set Rockdon and Rockgilan loose inside the Battle Base. Reina Stol found the injured Min, who warned her about Harley Robo. Reina interrupted him as he tried to steal the Phoenix Armor but he was able to knock her out. At the city Rom began to wonder why his team's battle with the Gandora was so repetitive and why they didn't retreated given their heavy losses. Pro Truck Racer, Jet and Drill agreed to keep them busy while he headed back to the Battle Base to investigate his suspicions. Grujious possessed Reina and tried to walk out of the base with the Phoenix Armor and the Dragon Helmet. Jim tried to restrain her despite Grujious electrocuting him. Garudi withdrew, his part in the plan done. Rom arrived and tried to help Jim with the possessed Reina. Grujious left her, taking the Armor and Helmet with him. Rom was able to knock the Helmet clear with the Wolf Sword but Rockdon attacked him before he can try again. Vikung-Fu was able to get to Rockdon's master off switch and deactivate him. Rockgilan had nearly forced Land Commander 5 into the Battle Base's engine room; if breached this would have destroyed the craft. Harley Robo, feeling responsible for the crisis, managed to disable Rockgilan by shooting his off switch.[4] 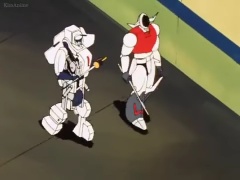 In episode 42, "Vikung-Fu - Cry of Anger!", after Diaman removed the Wolf Sword from Abarar. Grujios possessed Wrestler Robo to steal the sword from Harley Robo and Kendo Robo. When Harley Robo tried to stop the theft, he was stabbed by the sword.[5]

Note: In some English subtitles Harley Robo is called Harry.

A new mold. Turns from robot to motorcycle. This toy was recolored into GoBots 30 Night Ranger by Tonka.

A release of the Harley Robo for Machine Robo: Revenge of Cronos.