Mixer Robo is a fictional character from the Machine Robo series. He is a member of the Battle Clan who turns into a cement mixing truck. He was introduced as a toy in 1984, but did not appear in fiction until 1986.

Mixer Robo is a heroic member of the Battle Clan who turns into a cement mixing truck. He initially worked in a romtron mine for Lord Bison in Rod Drill's home town of Dakota until he was drawn into the war with the Gandora. Because of his mechanoid nature he does not need to breath oxygen and is resistant to cold, but is vulnerable to intense magnetic fields.

Action Toys Mixer Robo went up for preorder in October 2016. 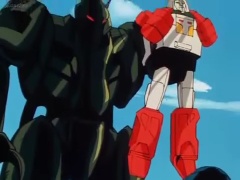 Mixer Robo first appeared in Machine Robo: Revenge of Cronos episode 11, "Pledging Love On the Great River". He worked in the Dakota settlement mine for Lord Bison, where he ran afoul of Casmodon. He joined in the Dakota rebellion against the Gandora after Vikung-Fu defeated Casmodon.[1] 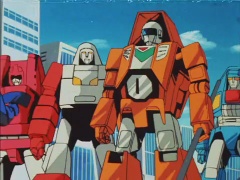 Mixer Robo was seen among the hypnotized population of Cleo City in episode 21, "Angel of the Mind, Vikung-Fu - Protect".[2]

Mixer Robo helped defend the city from a Gandora attack in episode 24, "Gather All Machine Robo".[3]

Although Mixer Robo did not appear in episode 27, "The Magic Mountain Knight Maskrock", one of the children in the school that was attacked was a young version of Mixer Robo. 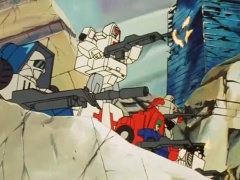 In episode 29, "Escape From the Underground - Pro Truck Racer Appears!", Mixer Robo appeared defending the city during an attack.

Mixer Robo was in episode 34, "Vikung-Fu Disappears in Space" where he worked at the construction of the Battle Base.

A new mold. Turns from robot to cement mixing truck. Comes with instructions and stickers.
This toy was released with new stickers as GoBots 17 Block Head by Tonka.

A new mold. Turns from robot to cement mixing truck. Comes with two knives and a stand.