Blackbird Robo is a fictional character from the Machine Robo series. He is a heroic member of the Jet Clan who turns into a stealth jet. He was introduced as a toy in 1984, but did not appear in fiction until 1986.

Blackbird Robo is a heroic member of the Jet Clan who turns into a stealth jet. He was a resident of Cleo City when he came under the mental influence of the Gandora. Because of his mechanoid nature Blackbird Robo does not need to breath oxygen and is resistant to cold, but is vulnerable to intense magnetic fields. His weapons of choice are his Ionoid Sonic Wave guns.

Action Toys Blackbird Robo went up for preorder in October 2016.

Blackbird Robo did not appear in episode 13 of Machine Robo: Revenge of Cronos, "Jet! Defeat the Double Death Blade!", but in the preview for the next episode Blue Jet said Blackbird and Battlerock would be his allies.[2] 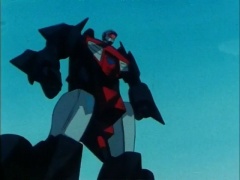 Despite being promoted at the end of the last episode, Blackbird Robo's first appearance in episode 14, "Burn and Run, Brother and Sister Warriors!" was a minor cameo where he was burned up by the heat while flying over a volcano.[3]

Blackbird Robo returned, alive and well, in episode 17, "Death in the Demonic Castle in the Sky Part 1", where he was one of several Jet Clan called in by Blue Jet to help recover Reina Stol when she was kidnapped and taken to the Sky Castle by Grujious. The jets were opposed by the Devil Satan 6 and had to retreat.[4]

The Jet Clan allies of Blue Jet continued to help in episode 18, "The Demonic Castle - Farewell Grujious", and once Reina was rescued and Grujious had been defeated they bid farewell and returned home.[5]

Blackbird Robo was among the hypnotized population of the Cleo City in episode 21, "Angel of the Mind, Vikung-Fu - Protect". Apollo Robo, Blackbird Robo, Falcon Robo and Shuttle Robo attacked Blue Jet when he attempted to enter the city, but Blue Jet easily knocked them all from the sky.[6]

In episode 22, "Rockdon Versus Rockgilan" Blackbird Robo was among the Jet Clan and Rock People enslaved by the Gandora.[7] 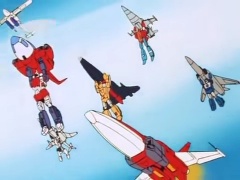 The volunteers from Yamilan City take off for their mission of mercy in Machine Robo: Revenge of Cronos episode 27, "The Magic Mountain Knight Maskrock"

Blackbird Robo appeared in episode 27, "The Magic Mountain Knight Maskrock". In the episode Blackbird Robo was part of a Yamilan City volunteer group lead by Rom Stol that went to retrieve the cure for Gandora rust poison gas which has effected Reina and some school children. Blackbird Robo gave Missile Tank Robo a lift when they flew off for their mission.[9] 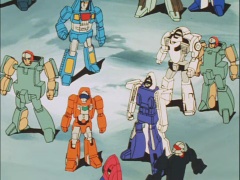 In episode 28, "Tough Trailer - 10 Seconds to Detonation" Blackbird Robo was present in Yamalin City during a Gandora attack that lead to the city's core computer starting a self-destruct countdown. The countdown was stopped at the last moment by Rod Drill.[10]

In episode 33, "The Lost Ruin - Four Secrets!", Blackbird Robo volunteered to do reconnaissance on the Gandora, but he was discovered by Garudi, and they pair shot each other from the sky. Blackbird was recovered and told Rom about his encounter.[11]

In episode 40, "Secret Valley of the Fossil Men", Blackbird Robo participated in an attack on the Varigale-X lead by Falcon Robo.[14]

In episode 41, "Power Riser - Break Through the Enemy" when Rom attempted to leave in his Power Riser suit to take on the Gandora he was joined by many of his allies, including Blackbird Robo, Cessna Robo and Falcon Robo.[15]

Note: Although called Blackbird in the series, some English subtitles of the series call him Black Knight and Bulagu. Blackbird Robo's voice actor Hideyuki Umezu also provided the voice of Joshua Joyce in the Japanese dub of Transformers: Age of Extinction.

A new mold. Turns from robot to jet. This toy was released as GoBots 43 Snoop by Tonka.

A release of the Blackbird Robo for Machine Robo: Revenge of Cronos.

A new mold. Turns from robot to jet. Comes with two guns and a stand.