Goryu is the name of two fictional characters from the Transformers series. The first Goryu was introduced in in 1989 as a regular villain in the anime series Transformers: Victory where he was voiced by Daisuke Gori. The second Goryu is his heroic mirror universe counterpart who appeared in stories from Fun Publications.

Goyyu is the leader of the Dinoforce. He often rides on the back of his Pretender shell.

He combines with his fellow Dinoforce members to become Dinoking, of which he is the left leg. Goryu is a bit thick headed and unliked by the Breast Force. His name means "mighty dragon".[1]

The biography for Goryu incorrectly identifies him as the head of Dinoking, when he forms a leg.

Leader of the Dinosaur squadron. He emits heat waves from the nails of both enormous arms, and destroys everything in its path. Can control gravity and uses this ability to crush his enemies. His weapon is a Tyrannosaurus Laser Gun. For his final attack he discharges from the Dinoking union and unites with his Tyrannosaurus shell and his enemies are caught in an inferno of shooting "The Tyrannosaurus spurring shot." A very serious raging personality, who likes to brag about being the leader of the Dinosaur Squadron, and forms the head of Dinoking in their united mode. Though stubborn and selfish, his comrades think well of him being the boss.

Goryu appears in episode #4, "Unite!! Multiforce." The latest Breast Force warriors—Jaguar, Drillhorn and Killbison -- along with Leozack and the Dinoforce make plans to attack an energy complex. The Decepticons strike from the air and the sea with the Dinoforce while the Breast Force members hide in the sand in ambush. The Multiforce spot the destruction from afar and battle the Dinoforce on even terms until they formed Dinoking. Jan informs the other Autobots that there is danger and Star Saber and the Brainmasters head out to investigate. Just as things look bad, the Multiforce merged to form Landcross to do battle with Dinoking. Star Saber arrives to help Landcross take on Dinoking while the Brainmasters battle Killbison and Jaguar, driving away the Decepticons.[2]

Goryu appears in episode #7, "Explosion!! The Energy Base" where the Decepticons build a new base in the jungles of South America to store energy. Transported to the jungle by Galaxy Shuttle Blacker leads the Multiforce to their target, but they are spotted by Yokuryu, who calls in the rest of the Dinoforce. Blacker leads the Decepticons away and sends the Multiforce to contact Star Saber for backup. Wingwaver sends Machtackle and Dashtacker back to Galaxy Shuttle, but refuses to leave Blacker behind. As Blacker is being overpowered by the Dinoforce Wingwaver comes to his rescue. The Decepticons decide to escape with the energy they have, but Star Saber arrives to stop them. Deathsaurus orders the Decepticons to leave the energy and instead blow it up, hoping to destroy the Autobots with it, but Star Saber is able to defeat Leozack before the Decepticon can set off the explosion.[3]

Goryu appears in episode #24 "Crisis! Ambush in the Desert." The Dinoforce attacks an oil field in Saudi Arabia for its energy. The Autobot Rescue Patrol free the human prisoners from Kakuryu. The Breast Force retreat when they became too injured to combine. Star Saber damages the Thunder Arrow and Deathsaurus retreats. Braver and Laster blow up Dinoforce's energon cube stockpile and the last of the Decepticons retreat.

As a result of Deszaras' plans to destroy the Earth by using a powerful space fortress, a meteorite hit the Earth near Dinoking and damaging him greatly. Forcibly separated the individual units were captured and repaired by the Autobots. In exchange, the Dinoforce gave information about the space fortress' weaknesses. Armed with this knowledge, Star Saber and Victory Leo destroyed the space fortress and defeated the Decepticons guarding it.

The Dinoforce is last seen in retirement from combat. When they are last seen, it appears they were doing some sort of construction work. 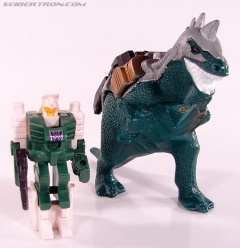 Goryu is a recolor of Generation 1 Icepick, with a different Pretender shell.

An mirror-universe version of Goryu appeared in the Transformers: Timelines fiction. He is one of the heroic Decepticons. Initially a simple artificial intelligence built by Wheeljack, he is granted an ember and the ability to transform to robot mode.

Goryu appears in the fiction Dungeons & Dinobots, a text based story from Fun Publications. He is one of the many Dinobots created by Wheeljack copying the designs from Grimlock. After surviving the battle at the Arch-Ayr fuel complex he wanders off with his small friend Slugfest. He is later captured by Cliffjumper and Sideswipe and reprogrammed as a Decepticon. He gains his name when Cliffjumper misunderstands his threat "Me gore you!" Grimlock takes the Dinobots and Dinocons to gain embers from the Omega Terminus.[4]

In Do Over Starscream discoveres that Goryu and the other Dinocons have secretly been granted embers and the ability to transform by Grimlock and the Omega Terminus.[5]