Dinobot is the name of several fictional characters from the Transformers series. The first Dinobot was a Maximal front-line combat expert who turned a velociraptor introduced in 1996.

The first character named Dinobot was introduced in 1996 as part of the Beast Wars series.

The [email protected] podcast for February 26, 2009 selected the Henkei Dinobot toy as one of their New Picture Picks.[2]

As if torn from the pages of earth's prehistoric past, a vicious velociraptor breathes again! But Dinobot is no ordinary 'raptor, he's a robot in disguise battling beside his heroic teammates, the Maximals! Armed with a spinning cyber-slash tail weapon and always hungry for battle, Optimus Primal considers him a natural combat expert who has clawed his way to the top one victory after another!

In season one, Dinobot originally arrives on prehistoric Earth with Megatron and the rest of the Predacons aboard the Darksyde.[3] When the Predacons scan the planet for local beings, in order to create beast modes for themselves, Dinobot receives the form of a velociraptor (though his appearance makes him more similar to a dromaeosaurus). After their arrival, Dinobot believes that Megatron has led the Predacons to the wrong planet and attempts to usurp him in a duel.[3] However, Scorponok, one of Megatron’s loyal crew members, blasts Dinobot away.[3] Determined to find the abundant amounts of energon, he confronts the Maximals outside their base, and challenges Optimus Primal’s leadership in a duel. When Optimus loses his footing, Dinobot has the opportunity to defeat him, but chooses not to saying that a victory like that would lack honor.[4] The engagement is interrupted by a surprise attack from the Predacons. Optimus saves Dinobot's life during the attack, prompting the two to come to terms.[4][5] From then on, Dinobot serves alongside the Maximals during the Beast Wars, and proves to be a valuable ally in both strength and cunning, as well as in his knowledge of his former Predacon comrades, which helps him anticipate what each one of them would do. However, Dinobot frequently clashes with Optimus over the Maximals' morals, and has a rocky relationship with Rattrap, who normally refers to him as "Chopperface," to which Dinobot replies by calling him "Vermin." Despite this, he grows to respect the Maximals, and forges strong friendships with Optimus and Rattrap, though the relationship between him and Rattrap tends more towards them being frenemies, as the two seem to enjoy their verbal sparring and engage in it at every opportunity, yet despite their apparent dislike will consistently come to one another's aid. 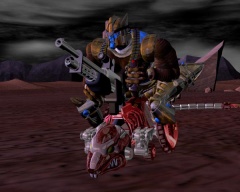 In season two, Dinobot is one of the few Transformers who does not become a Transmetal, but he still remains a strong asset to the Maximals. Following the destruction of an artificial moon that hovered around Earth, Dinobot researches the strange goings-on and realizes that Megatron had in fact landed on the correct planet: Earth.[6] He infiltrates the Predacon base, and steals two golden discs which contain information pertaining to the planet’s vast supply of Energon, as well as the location of The Ark.[6] The disks also trouble Dinobot, as he believes they can predict the future.[7] Dinobot eventually contemplates rejoining the Predacons after realizing that Megatron was going to triumph over the Maximals.[7] He returns one of the disks to Megatron, but defies an order to destroy Rattrap, realizing that the scale of Megatron's ambition is too dangerous.[7]

Consumed with guilt, Dinobot returns to the Maximals. He eventually discovers that the future written on the discs can be altered after witnessing Megatron destroy a mountain, and watching the writings on the disc change.[8] After Megatron also realizes this, he orders the Predacons to eradicate all the primitive ancestors of humankind, on the planet, believing the attack would deny the Autobots an important ally in their future battle against the Decepticons. Although he is now aware that the future can be changed, Dinobot chooses to preserve history instead, and proceeds to single-handedly defeat all of the Predacons. He then subdues Megatron himself with a makeshift maul and retrieves the golden disc that he had previously given back.[8] However, Dinobot sustains mortal wounds during the conflict, and destroys the disc with the last of his energy.[8] His fellow Maximals arrive shortly after and stand by his side as he passes away. His final words are, "Tell my tale to those who ask. Tell it truly, the ill deeds along with the good and let me be judged accordingly. The rest is silence." As his Spark leaves his body, Optimus gives a proper eulogy; "He lived a warrior and died a hero. Let his Spark join the Matrix with the greatest of Cybertron." Out of respect for their fallen comrade, the Maximals give Dinobot a proper funeral, performing the missing man flyover, in which his body is placed in a suspended animation pyre that disintegrates him.[8] The hominid that Dinobot saved find his makeshift maul and makes use of it, beginning humanity's technological development.[8]

Using a blank protoform, a fragment of Rampage's spark, alien technology, and DNA of the original Dinobot, Megatron is able to create a clone of Dinobot in Transmetal II form, possessing Dinobot's combat experience and skills but none of his honour, willing to mount sneak attacks against weaker opponents rather than engage in fair combat. However, following the destruction of Rampage, Dinobot II is somehow infused with the spirit of his predecessor, causing him to regain the original Dinobot's honor and turn against Megatron at a crucial moment, providing the Maximals with the key to defeating him. He dies once more in the final struggle, remaining on board the shattered Decepticon ship the Nemesis as it crashes, but is honored by the Maximals for his role in their victory.[9]

Dinobot's early story was told in the Timelines tale Dawn of Futures Past, where he was seen escaping with the disc alongside Megatron and Scorponok, outraged because he was not able to battle the Maximals honorably, having to be cowed into fleeing by Megatron. Dinobot was further outraged when Megatron planned to flee into transwarp, but was delighted when Megatron opened fire on the Axalon while doing so.

Dinobot appeared in the 2006 TransformersCon voice actor play Battle of the Bootlegs.[10] 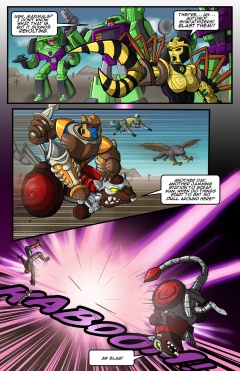 Cheetor, Dinobot, Rattrap and Silverbolt charge into battle in Days of Wreckening

Dinobot appeared in the TFcon 2012 story Days of Wreckening.[11]

When the toy was sold in Japan it was repainted with lighter stripes and a metallic gold head to match the television model. In Japan Dinobot was sold alone and packaged with Tarantulas.

A premium toy included with Happy Meals, this Dinobot is a transmetal.

A recolor of Dinobot done in browns with red stripes across the back.

The Transmetal II toy of Dinobot came in three variants. The first was released as a post-Christmas edition in late 1998 (for the 1999 release year) in show-accurate colors (this version being the model for the series), identifiable due to all pre-1999 Transmetal 2s having a "Transmetal II" logo. The second version makes use of navy blue and metallic maroon detailing on an ivory-colored body, as opposed to brown and maroon. The "II" logos are replaced with a "Transmetal 2" logo. The third and final Transmetal II Dinobot was nearly as commonplace as the second, with the ivory tooling replace with a whiter colored plastic. The remaining parts were decorated in a brighter blue and vacuum-metallized red.
This toy was recolored into the Beast Machines Rapticon.

In 2006 the original Dinobot toy was one of the toys selected for the Beast Wars 10th Anniversary toy line. He was recolored in more show-accurate coloring. He came packaged with one of the six pieces used to make the Transmutate toy plus a DVD of his most famous episode "Code of Hero".[15][16]

One of the BotCon 2006 exclusive figure is a remold of Armada Hoist which is a homage to Beast Wars Dinobot. This figure is supposed to represent Dinobot before he was reformatted into an animal form. He turns into a backhoe.[17]
This toy was featured on page 19 of the book Transformers: The Fantasy, The Fun, The Future by Erin Brereton published by Triumph Books.

In 2007, Takara Tomy released their version of the 10th Anniversary of Beast Wars toys.

As part of the 25th anniversary commemoration, the Universe series released a new mold of Dinobot.[18][19]
This toy's design was repurposed as Shattered Glass Dinobot; it has not yet been reused for another toy.

A recolor of Universe Dinobot in show-accurate colors.

In 2013 a version of Dinobot was introduced to the Shattered Glass world. He was a member of the Megatron's heroic crew.

One toy concept for a BotCon 2011 was Shattered Glass Dinobot made from Universe Dinobot in the colors of Terrorsaur.[20]

As part of the 25th anniversary commemoration, the Universe series released a new mold of Dinobot.[21][22]
This toy was repurposed as Shattered Glass Dinobot.