From WikiAlpha
Jump to: navigation, search
Trailbreaker is the name of several fictional characters from the Transformers series. Due to trademark issues, newer toys of the character are named Trailcutter. He has been called Trailblazer in the IDW comics.

Trailbreaker (Glouton in Canada, Tuono in Italy) was portrayed as a light-hearted joker, who often acted a morale booster for his comrades. Deep down, however, he considers himself a liability due to his high fuel consumption. Because of this he has a low sense of self-worth, he often asks to be left out of missions. Despite this, the other Autobots know he is a valuable addition to their ranks.

He sometimes form part of the Sky Reign combiner.

According to original tech spec notes written by Bob Budiansky, found at Iacon One in 2006, the original name for Trailbreaker was "Guzzle", a name later used by another Autobot character.

Trailbreaker was one of the original Autobots aboard the Ark. When it crashed, he was re-activated four million years later and his vehicle was converted to that of a Toyota Hilux. He was a hearty character who would make light of any situation (just as his tech spec portrayed him). His primary feature was his force field which he often used to defend him and his comrades.

Trailbreaker accompanied his fellow Autobots on their first mission to stop the Decepticons on Earth—a mission that took him to an off-shore oil rig. The Decepticons plundered the rig for energon and destroyed it, leaving it a flaming wreck that endangered its human crew. Trailbreaker used his force field to contain the fire, while Wheeljack used his built-in fire suppression systems to douse the flames.

Later, Trailbreaker served as a spy despite his stated function as defensive strategist. He, along with the humans Sparkplug and Spike Witwicky, camped out near the Decepticon headquarters and eavesdropped on their plans to raid the ruby mines of Burma.

As the series progressed and more new characters were introduced, Trailbreaker only appeared when his force field was needed. In "Triple Takeover" a plot by Starscream, Astrotrain and Blitzwing resulted in the flooding of a city. Trailbreaker used his force field to protect himself and a small group of Autobots from a large tidal wave.

His force field later saved all the Autobots from being disintegrated by the Sun in the episode "Megatron's Master Plan Part 2", and it again saved them from a Decepticon ambush in "The Immobilizer". Trailbreaker's last animated appearance was in episode 64, "Masquerade".

Trailbreaker did not appear in The Transformers: The Movie or the seasons beyond. However, part of the movie's storyboard depicted that he would be seen dead (much like Windcharger and Wheeljack) during the Decepticons' attack on Autobot City. This was cut from the finished movie.

Trailbreaker appeared in the 1985 story Autobots Fight Back by John Grant, published by Ladybird Books.[1]

Generation 1 Trailbreaker was among the Autobots who appeared in the Transformers: Universe comics, although he was not produced as a toy in that line. His form in the 3H comics was based on his original toy, not the redone animated appearance.

Trailbreaker was amongst the Autobot heroes of the Great War welcomed back to Cybertron and soon transported away by Unicron. Trailbreaker was the only one not reformatted into a new body, but he was forced to fight for Unicron's amusement (so that the Spark energy from fallen combatants could revitalize Unicron's shattered frame). Trailbreaker eventually freed himself by performing a risky spark swap with Silverbolt. All were subsequently freed by the resurrected Optimus Primal,and Trailbreaker went on to serve him as part of the new Autobot faction.

Although Universe ended at issue #3, the flashback of Optimus Prime would reveal what happened. In the final battle between the forces of Optimus Primal and Unicron, the Chaos-Bringer had disappeared (due to the events of Transformers: Energon), with Primal's forces barely making it out. Trailbreaker was among those seen escaping.

A toy called Ironhide in Transformers: Universe was painted in the colors of Generation Ones Trailbreaker. It is suspected that this toy (along with a version of Transformers: Robots in Disguises Prowl 2, repainted in G1 Red Alert's colors) was intended to be a part of an earlier line of eight Spy Changers, produced as homages to classic Generation One Autobots cars. Because those eight toys both resembled and carried the names of their Generation One counterparts, it would seem more appropriate for the Transformers: Universe version of Ironhide to have been named Trailbreaker instead.

In this reimagining of the Generation One story, the Ark was discovered by the terrorist Cobra Organization, and all the Transformers inside were reformatted into Cobra vehicles remotely controlled by the Televipers. In this storyline, Trailbreaker turned into a Cobra Stinger vehicle.[2] However, after the Transformers were freed from Cobra's control, Trailbreaker was killed by Storm Shadow's S.N.A.K.E battlesuit.

When Decepticon leader Megatron and Autobot leader Optimus Prime disappeared in an accident with a space bridge, the Autobot and Decepticon forces splintered into smaller factions. Trailbreaker stayed with the Autobots under the leadership of Prowl. Hound, Tracks, Trailbreaker and other Autobots showed up as reinforcements when Prowl and his team of Autobots confronted Trypticon. Only Shockwave calling Trypticon away to battle the Fallen saved them. (Transformers: The War Within - The Dark Ages #4).

Trailbreaker was among the Autobots who followed Optimus Prime on his mission aboard the Ark. After leaving Cybertron, the Ark was attacked by Megatron's ship, the Nemesis. Once the Decepticons boarded the Ark, it crash-landed on Earth, where all on board were preserved in emergency stasis. In 1984, a volcanic eruption awakened the Ark's computer, Teletran-I, which repaired all on board. It reformatted Trailbreaker in the form of an Earth truck (specifically, a Toyota Hilux camper pickup).

Eventually the combined forces of the Autobots on Earth and their human allies were able to capture the Decepticons. A ship called the Ark II was built to take the Transformers and some human companions back to Cybertron, but the ship exploded shortly after takeoff. The human allies were killed, but the Cybertronians were lost in the ocean, again in stasis lock.

After Spike Witwicky used a piece of the Matrix to revive Optimus Prime, Optimus traveled to the remote shoreline where he was recovered and used the Matrix to revive Jazz, Mirage, Sideswipe, Sunstreaker, Superion, Trailbreaker and Wheeljack (Transformers: Generation One #2). Trailbreaker returned to Cybertron with Optimus Prime and most of the Autobots to face charges, after Ultra Magnus informed them the war on Cybertron had ended.

Although Universe ended at issue #3, the flashback of Optimus Prime would reveal the following: during the final battle between the forces of Optimus Primal and Unicron, the Chaos-Bringer disappeared (due to the events of Transformers: Energon), with Primal's forces barely making it out. Trailbreaker was among those Autobots seen escaping.

Trailbreaker is among the Autobots present when Megatron attacks Iacon with his new weapon, Devastator.[3]

Trailbreaker made his first IDW Publishing appearance in the Spotlight issue on Kup. He was called in by Springer to rescue the veteran Autobot from a deadly radiation-filled planet where a malfunction in Kup's spark core could cause its destruction. Trailbreaker used his force fields to keep Kup's spark from imploding before transporting him back to the Ark 17.

Trailbreaker was on the Autobot Orbital Command Hub in Spotlight: Blaster. He was present when Blaster was recovered and returned to the Autobots. 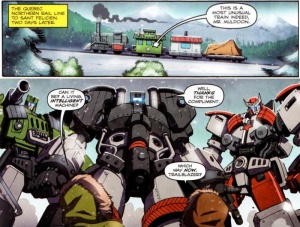 Hound, Trailblazer and Ratchet combine to form a train in Infestation 2: The Transformers #1

Trailbreaker, now called Trailbrazer, appeared in the Infestation 2: Transformers comic series working with Hound, Ratchet and Wheeljack to transport Tobias Muldoon and Nicola Tesla to Quebec to help repair Optimus Prime. In this comic he turned into a black steam locomotive.[4]

One of the least prominently featured of the original 18 Autobots, Trailbreaker appeared in the Marvel Comics Transformers series in a capacity similar to his appearance in the animated series. However, the rapid introduction of new characters meant that Trailbreaker was phased out quickly. He last appeared in the US comic watching the duel between Grimlock and Blaster, although he continued to appear sporadically in the UK comics, including in the movie-related future arc Space Pirates, where he was killed in the Quintesson attack on Autobot City.

Although no Trailbreaker toy was released in the Alternators line, he was mentioned in the Japanese fiction for the series. According to the story that came with Binaltech Swindle, the body Swindle inhabits was intended to be the new body for Trailbreaker. The body was stolen by the Decepticons and Swindle's spark installed in it. Because of this many kitbashers have taken to repainting Swindle black and adding Autobot symbols to make an Alternators Trailbreaker.

The toy that eventually became Alternators Optimus Prime may have initially been intended to be Trailbreaker. Takara requested that Hasbro make the truck model be Optimus Prime instead, as pick-up trucks are not popular in Japan—they believed the only way the toy would sell was if it was the popular Optimus Prime.

When the Optimus toy was recolored black into Nemesis Prime, some fans took to transplanting the head off Swindle or Rollbar onto the black pick-up to make an Alternator Trailbreaker. Fan-made sticker sets have even been produced and sold to add details making the figure look even more like Trailbreaker.[5]

In the original toy line and animated TV series, Trailbreaker turns into a black Toyota 4WD HiLux, and is one of the first year Transformers toys, based on one of the Diaclone line of toys, where he was blue (in addition to other colors). Two variants of this toy exist, the original and one with a heat-sensitive rub-symbol. In 1985 Trailbreaker was remolded into the Autobot Hoist.
Trailbreaker was reissued in Europe in 1991 and in Japan in 2001, but never in the U.S. According to store listings, there were plans to reissue Trailbreaker and Ironhide as a commemorative toy in 2005, but due to poor sales of the line, they were never produced.

First announced in Previews magazine for December 2002 were a set of 5 Autobot Spy Changers - Wheeljack, Sideswipe, Trailbreaker, Prowl and Mirage.

Produced by Wizards of the Coast, wave 2 of their Transformers 3D Battle-Card Game included a Trailbreaker card, who was a redeco of Autobot Ratchet from wave 1.

A Japan-exclusive reissue of the original Trailbreaker toy.

An all-new mold first announced on issue #35 (Oct/Nov 2010) of the Transformers Collectors' Club magazine. Due to Hasbro's inability to secure the Trailbreaker name, the character was called Trailcutter.[6][7]

A new mold. Turns from robot to truck. Comes with a free IDW comic book.[8]

Can form a limb of any Combiner Wars or Unite Warriors Combiner, but is specifically noted as forming part of Sky Reign.

Trailbreaker is a playable character in the PSP version of Transformers: The Game. His vehicle mode is an SUV, while his robot mode is a modified version of Decepticon Dropkick.

Trailbreaker and his partner Hound are requested by Optimus Prime to implant a virus on a satellite that the Decepticons Thundercracker and Shockwave send to call in Decepticon drones. Their mission is to find a satellite dish and use it to transmit the virus. They find a dish, but it is easily destroyed by the drones. The find and repair another dish. Because a wave of Decepticons is coming, Hound decides to stay and hold the satellite in position while Trailbreaker transmits it. They successfully transmit the virus, which destroys all of the Decepticon drones, but Hound is electrocuted in the process. Trailbreaker grieves over the loss of his partner, but credits his sacrifice to save Earth.

Trailbreaker is an evil Autobot.

When Trailbreaker appeared in fiction he was depicted as a virtual recolor of Generations Deluxe Trailcutter in bluwe Diaclone Trailbreaker colors.

One toy concept for a BotCon 2011 was Shattered Glass Trailbreaker made from Transformers 2007 Dropkick.[9][10]