From WikiAlpha
Jump to: navigation, search
For the bite from bugs, see Insect bites and stings.

Bug Bite (sometimes spelled Bugbite) is the name of two fictional characters in the GoBots and Transformers series. The original Bug Bite is an evil Renegade GoBot turned Decepticon introduced in 1984.

Bug Bite was a Renegade GoBot who transformed into a yellow Volkswagen Beetle.[1]

Bug Bite was the inspiration for the TFcon character Bug Chomp.

Bug Bite was named number 2 on the list of "20 GoBots That Remind Us Why the GoBots Sucked So Incredibly Hard" by Rob Bricken on gizmodo.com in 2013.[2]

GoBots: Herr Fiend's best friend, Bug Bite's no love bug. Cold-hearted and wicked, he loves to "sting" his victims and give them the Bug Bite "itch" with his deadly laser guns.

Timelines: Bugbite is a Decepticon shrouded in mystery. Many serving under Bludgeon are unsure as to why he gained such favor. commander of one of the finest ships within Bludgeon's army, Bugbite enjoys unusual freedom of action, often disappearing for months at a time with his eclectic crew of ne'er-do-wells on missions of which none of them ever speak. Many under his command have abandoned partners and friends without a word leading many to suspect even greater duplicity than is typical among the Decepticons.

Like most GoBots, Bug Bite has numerous abilities because of his robotic body. He does not age, can survive in space and is super-humanly strong and tough. He can fly in robot mode and project energy blasts from his hands. His body heals quickly when supplied with energy. He can turn into a Volkswagon Beetle. 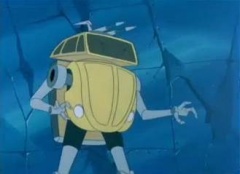 Bug Bite in "The GoBots That Time Forgot"

He made his debut in the Challenge of the GoBots cartoon, specifically the episode "The GoBots That Time Forgot". Here he was featured as the second-in-command to Gunnyr, 'Renegade' ruler of a society of GoBots who live deep inside the world of GoBotron. They believe themselves to be the planet's only inhabitants. The two Renegades possessed scramblers that gave them control of the other GoBots in the underground world. Scooter accidentally discovers this world and soon Bug Bite and Gunnyr's command ends.

When Psycho appeared in Robo Machine Featuring the GoBots Annual 1986 by World International Publishing he was depicted in a form that looked like Bug Bite.

Bug Bite is a main character appearing in Fun Publications fiction Withered Hope, a text and comic based story. Sent to investigate the effect the destroying their universe six GoBots are reformatted to look like an Autobots and Decepticons and sent through the Interfacer to the source of the disturbance - the 22nd level. They accidentally arrive on Transtech Cybertron where they are kept against their will in the city of Axiom Nexus. Bug Bite escapes without his allies using an astro beam device.

In Transformers: Timelines volume 2 #2, "Games of Deception", traveling to Earth with a group of Bludgeon's Decepticons (unaware they were being trailed by Ultra Magnus' forces), they met up with Megatron's second-in-command Starscream. Capturing Mirage, Bug Bite then had Starscream, Skywarp and Ramjet implanted and controlled with cerebro shells. Travelling to meet Megatron, Bug Bite had the Decepticon leader and his troops likewise implanted with cerebro shells, revealing his plan: he had travelled to Megatron's dimension to take revenge on the Transformers for inadvertently causing so much damage to his home dimension. Unfortunately for him Megatron was more resistant to the effects of the shell than Bug Bite had thought. At that point Magnus' forces arrived, seeking to rescue Mirage, and disabled the cerebro shells. In the ensuing three-way battle, Bug Bite tried to reach the gun of the fallen Dirge, only to have his head blown off by a point-blank blast from Megatron.

In the final chapter of Withered Hope it is revealed that Bug Bite survived the events of "Games of Deception", along with Weirdwolf and Dreadwind. They return to their ship about the time the other GoBots arrive on Earth.[3]

A Super size GoBot toy. The figure was originally issued in Japan as part of the Machine Robo Scale Robo DX size, based on real-life vehicles. It was released in Japan in 1983, then America and Europe in 1984. In 1993, it was reissued as part of Bandai's short-lived Robo Machines line, under the designation "De Luxe Beetle".
This toy was the basis for Psycho's form in some GoBots books and was repurposed into TFcon Bug Chomp.

Part of a 6-pack of recolors made by ehobby. Bug Bite is a white recolor of reissue Bumblebee available. While the name of the figure was announced in pre-release promotional material, the final toy was unnamed for legal reasons.

Bug Bite appears in the 2008 April Fool's comic "Shattered Expectations" by Fun Publications. His appearance is based on the Timelines Bug Bite with small changes including an eye patch.