From WikiAlpha
Jump to: navigation, search
For other uses, see Alpha.

Alpha Bravo is a fictional character from the Transformers series. He is a heroic Autobot who becomes a helicopter who was introduced in 2015.

In 2015 a new character called Alpha Bravo was introduced as part of the Generations Aerialbots, taking place of Slingshot. Alpha Bravo becomes a limb of Superion and also has been known to help form Ultra Prime. He can also help form Wreckage. In BMOG Toys comics Alpha Bravo formed the left arm of Galvatronus.

The newest member of the Aerialbots and the only member that is not a jet plane. His assault helicopter mode gives the team a member with VTOL and hovering capabilities, but he cannot match his teammates’ top speed. Being the “new guy” and the slowest flyer of the group makes him feel like he has something to prove. Carries four tracker missiles that process a “spark lock” to their targets. With fellow Aerialbots forms “Superion.”

Alpha Bravo was part of the Galvatronus combiner. Galvatronus deserved a big weapon in battle, so he carried the Obliteration Cannon made of parts of Cobiak, Deep Blue, Mant-Axe and Ursenal. He also carried an axe from the Dread Pickaxe Raybot, a rifle and scanner from Peg-Paw Plunder, a serrator axe from Mant-Axe and a plutonium rifle from Bearium.[2]

Alpha Bravo was one of the central characters in the Fun Publications story Deadly Aim.[3]

Alpha Bravo was still in training when Thunder Mayhem ravaged Cybertron, and was spared the gruesome fate of the other Aerialbots when they fell victim to Thunder Mayhem. He fled Cybertron shortly afterwards and traveled to Abraxas. There, he adopted a local vehicle mode as a disguise, and hid out in the motor pool of an urban rescue force. The pilot assigned to him, Lieutenant Feenliess, had no idea that her vehicle was in fact a Transformer in hiding.

Alpha Bravo spent several years alone on the planet until a strange "meteor" crash-landed on the planet. Alpha Bravo investigated and discovered Offroad, another refugee from Cybertron. Alpha Bravo was momentarily put off by the fact that Offroad was a Decepticon, but promised to help him integrate into Abraxan society anyway. Alpha Bravo helped Offroad find a local disguise based on some of the local vehicles, and Offroad soon joined Alpha Bravo's rescue team.

The two Cybertronians helped out when they could, developing a deep friendship as they did so. A string of mysterious fires led the Abraxan security forces to realize that a gang of local arsonists had provoked the blazes. Offroad broke cover to try and rescue four of their hostages, but neither he nor Alpha Bravo were able to extricate the hostages before the building went down, killing all the Abraxans. In the aftermath of this disastrous operation, Alpha Bravo fell into a deep depression, feigning engine trouble to discourage his human pilots from taking him out into the field. Offroad managed to comfort him and talk him out of his depression, and Alpha Bravo soon returned to active duty. 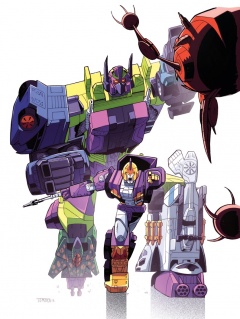 Wreckage and Impactor in Deadly Aim

The two Transformers were later discovered by Impactor, who recruited them into his new makeshift team of Wreckers, a team en route to Cybertron to confront Thunder Mayhem. Fractyl filled them in on Impactor's plan: to create a new combiner of their own to counter Thunder Mayhem. Both Offroad and Alpha Bravo had already been prepped with combiner technology. After Fractyl augmented Toxitron with a sample of Greenergon, the Wreckers headed out to test their strength against a nest of Mecannibals. Their combined form, Wreckage, easily trounced the metal-eaters, but then quickly spiraled out of control.

After separating and regaining consciousness in the medical bay, Alpha Bravo came to the conclusion that he had to stop Wreckage from re-forming by any means necessary. The other members of the team were far too difficult to kill, so with a heavy spark, Alpha Bravo felt he had no choice but to murder Offroad. Unable to live with himself, Alpha Bravo allowed himself to be slain by Toxitron.

When it was unclear whether all of the damaged Superion's component robots could be saved, Alpha Bravo volunteered as a potential replacement. He coldly informed Wheeljack that protecting Cybertron was more important than matters of affiliation, prompting the more laid-back Powerglide to good-naturedly tell him off.

In The Transformers: Windblade vol. 2 #1 Menasor was defeated by Superion.

In The Transformers #51 Alpha Bravo and other Aerialbots participated in a mission ordered by Optimus Prime to drop containers in West Africa which caused plants to grow in the desert.[4]

A new mold. Turns from robot to helicopter. He can also become any limb of a Combiner Wars style combiner, but his usual placement is as the right leg of Superion or as the left arm of Ultra Prime. Comes with a gun, a gun/hand/fist. Was packed a collector card or comic book.
This toy was recolored and remolded into Generations Blades, Skyburst, Stormclash and Vortex, Timelines Spinister and Unite Warriors Blades and Vortex.