Sledge is the name of four fictional characters from the Transformers series. Sledge has always been portrayed as a Decepticon-aligned construction vehicle. The first Sledge was introduced in 1990 as a Micromaster combiner.

Sledge is the name of a Decepticon Micromaster. He is a member of the Micromaster Combiner Constructor Squad.[1] Sledge is a dedicated but unimaginative worker.

As part of the Micromaster Combiner force, each member of the Decepticon Constructor squad can be separated from its partner and re-combined with another Micromaster Combiner to form an incredible new Micromaster Combiner constructor! Can turn raw ideas into structural monsters of hard concrete! Known for constructing monuments at Decepticon headquarters after every Autobot conquest! Enjoy watching the destruction of something beautiful so they can build a frightfully ominous edifice in its place! Together they're unbeatable. When separated, too busy trying to out-design each other. They take pride constructing rather than destroying. Will build anything, anywhere, anytime for the highest bidder! Combine to form crane, dump truck, and ground digger vehicles.

Sledge has a one-page biography in Dreamwave's Transformers: More Than Meets The Eye series.

Sledge combines with Hammer to form a dump truck. Sledge was recolored into Terror-Tread.[2]

Sledge is a member of the Decepticon Construction Team.

Sledge is a member of the Decepticon Construction Team; Sledge transforms into a scoop loader. He was is to combine with his team to form the giant robot Constructicon Maximus. In the Energon TV show, Sledge is a seemingly non-sentient drone commanded by team leader Steamhammer. As with all of the Energon combiner limbs, Sledge has a twin brother on his team - Bonecrusher. Their energon weapon is a claw. In the Japanese series, each member shares his name with a Generation 1 Constructicon - Sledge's name is Scrapper.

in Transformers: Energon Construction Maximus was one of four combining Transformers sealed away in stasis beneath the surface of Cybertron to guard a hidden reservoir of Super Energon. Megatron, guided by Unicron, set out to search for it, and destroyed one of the immobile robots in his rage, only for the reservoir to then reveal itself. As the guardians awakened, Megatron immersed himself in the Super Energon to upgade himself into Galvatron, and Constructicon Maximus and Bruticus immediately swore fealty to Galvatron as the one who had awoken them. However, their "brother," Superion, refused, recognising Galvatron's evil and siding with the Autobots.

Although an Energon editon of "Transformers: More Than Meets The Eye" biography series was planned, it not released before the company went bankrupt. Art for Sledge was produced.

He shares a mold with Energon Bonecrusher. He was later recolored into Classic Scrapper and Bonecrusher.[3]

Sledge is a Decepticon aligned Mini-Con.

He had a biography printed in issue #17 of the Transformers Collectors Club magazine, which described him as a bright person who is frustrated with his body, which is more designed for destruction that creating things.[4]

Sledge appeared among the Mini-Cons in the story The New World. He was among the Mini-Cons who followed Broadside (Transformers) in defecting to the Decepticons. He aided in the assassination of Modus Prime and then claimed a crazed Autobot was responsible. He and Wideload then destroyed the body of the Autobot before it could be examined.[5] 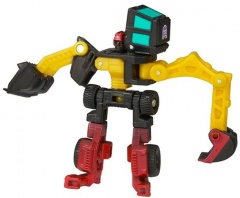 Sledge is a new mold. He came packaged with his team members.[6]

Sledge is a Decepticon who was given Power Core technology by Megatron for his deep loyalty to Megatron and a deeper dedication to destruction and mayhem.[7] Where Power Core Combiners fits in Transformers fiction is vague, although it has some connections with the 2007 live action Transformer movie series.

A new mold. His partner Throttler transforms into a drill that mounts on the scooper of his backhoe mode.