From WikiAlpha
Jump to: navigation, search
For other uses, see Scylla.

Scylla is a fictional character from the Transformers series. She was a reoccurring villain in the Beast Wars II series in 1998.

Scylla is a fictional character from the Beast Wars II series. She was a member of the Seacon Space Pirates under the command of the pirate captain Halfshell.

As a Scramble City limb she can form any limb of a Scramble City style combiner or combine with Metroplex or Metrotitan, but her normal mode of combining is as the left leg of God Neptune. 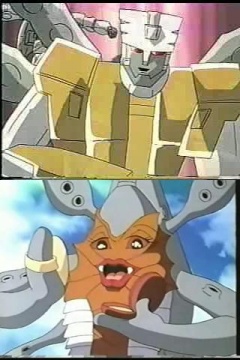 The Seacons first appeared in episode #19 of Beast Wars II, called "The Space Pirate Seacons!" In that episode Terrormander was piloting the Seacon space ship when it landed on the ocean of planet Gaea. The Maximals investigate the arrival of the Seacons, sending Scuba and Diver. Scylla develops a crush immediately upon meeting Scuba. Halfshell discovered the Maximals and attacked them. After some fighting the other Seacons arrived and they merged into God Neptune. Scuba and Diver captured the Seacon's ship and used it to draw God Neptune away. God Neptune caught up to the ship right as it exploded, blowing him apart into the Seacons, who were left stunned at the bottom of the ocean.

The Seacons returned in episode #21, called "The Tentacular Scuba", where they have recovered and are repairing their ship. They are discovered by Thrust and Dirge. The Seacons fire on the Predacon jets, who fly away. Scylla starts hunting for her love Scuba, but meets Bighorn, who develops an immediate crush on her. Terrormander attacks Bighorn, Diver and Randy, but Bighorn overpowers him. Sea Phantom then attacks Bighorn, but again the Maximal defeats his opponent. Bighorn attempts to get to his love Scylla, but she attacks him. Diver rescues Bighorn and the Seacons try to form God Neptune, but fail as Scylla is missing. Scylla finds Scuba, but the Maximals attacks her. Scylla rejoins the Seacons and they form God Neptune correctly, using his power to chase away the Maximals. Scylla is left as heartbroken over Scuba as Bighorn is over Scylla.

The Seacons appeared in episode #23, "Showdown in the Sea."

The Seacons appeared in episode #25, "The Final Battle."

The Seacons appeared in episode #29, "The Artificial Planet Nemesis."

The Seacons appeared in episode #40, "Revenge of the Space Pirates." In this episode God Neptune fought Magnaboss and Leo Prime. God Neptune was winning the battle until the other Maximals joined in the fight and held him down as Magnaboss fired on him, knocking him apart into the individual Seacons.

Scylla appears in the story Beast Wars Shattered Glass by Fun Publications. Ultra Magnus and his Autobots discover that their ship's high security storage rooms were damaged in the crash and the Autobot bodies in stasis pods were lost. They head out to recover the pods when they are attacked by Dirge and Seawing. They find the pods, but also discover that Megatron has gotten to them first. He's converted the three Autobots into Autojetter, Autolauncher and Scylla, who are loyal to him. The Decepticons attack the Autobots, who are only saved thanks to the intervention of Depth Charge. Ultra Magnus orders the retreat, as there is nothing left for them to recover. Depth Charge informs the Autobots of his mission to save the multiverse.[1] The Decepticons pursued the Autobots to a chasm, where they watched Megatron take on Ultra Magnus and be defeated. They climbed to the bottom of the chasm to retrieve their fallen leader and found a giant face hewn into the rock. It cheered Megatron up immensely once they dug him out of the rubble. Seawing and the others watched Megatron utilize the equipment in the cavern they'd found. The Seacons later attempted to retrieve the "Maximal" energy purifier, and merged into God Neptune so they could fight off Magnaboss. Combining into God Neptune once more, the Seacons battled the Maximals until they were all sucked into a dimensional rift thanks to Ultra Mammoth.

A version of Scylla also appears in Beast Wars: Uprising, where her appearance is clearly based on that of the Transformers: Cybertron Decepticon Thunderblast.

Scylla had a biography printed in the Beast Wars Sourcebook by IDW Publishing.[2] The IDW biography paints her a vain and merciless strategist. She seeks to destroy anything described as more beautiful that herself.

The Seacons appeared in the Beast Wars II manga issue #4, in a story called "Realize the Forbidden Love!"

Scylla appeared as a character in the Duel Fight Transformers Beast Wars video game for the Game Boy Color. 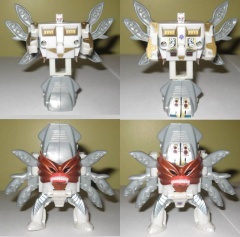 Sold in a gift set with the other Seacon Space Pirates. Scylla is a recolor of the Generation 1 Decepticon Tentakil, but missing all the accessories. She was packaged together with her 4 fellow Seacon Space Pirates.
This toy was later recolored into Timelines Tentakil.

A set of replacement labels for the Beast Wars II Seacons.[3]