Creepy is a fictional character in the GoBots series introduced in 1984. He is an evil Renegade Monster GoBot.

Creepy is a Renegade loyal to the Master Renegade who turns into a scorpion-like monster.[1]

Like most GoBots, Creepy has numerous abilities because of his robotic body. He does not age, can survive in space and is super-humanly strong and tough. He can fly in robot mode and project energy blasts from his hands. His body heals quickly when supplied with energy. He can turn into a robotic scorpion-like monster. 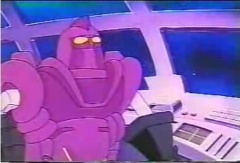 Creepy in Challenge of the GoBots

Note: Creepy appeared in the colors of his purple toy in all animated appearances.

In episode 61 of Challenge of the GoBots called "Quest for New Earth" Creepy, Scorp and Vamp aided the Master Renegade from escaping his imprisonment by Cy-Kill on Roguestar.[2]

Creepy was featured in the 2016 Ask Vector Prime story Echoes and Fragments, set during the events of The Transformers: The Movie. The manipulations of the evil Gong and Sideways resulted in various GoBots, Rock Lords and Starriors swapping places with characters during the events of that film. He was one of the monster GoBots on the planet Antares III, taking the place of the Quintessons and Sharkticons of Quintessa in the story. Creepy and Vamp lead Hot Rod and Kup to the Dactyl pit.[3]

Creepy appeared in the episode 50 story "Chains of Doom".

Creepy appeared in the story "Scooter's Mighty Magnet" as one of Cy-Kill's minions.[7]

Turn from humanoid robot to robot monster.
The purple/black version of Creepy was sold in stores.

A special green/purple version was offered as a mail-away exclusive by sending in UPCs from four GoBots.[8]
This color represents the character as they appeared when enslaved by the Overseers in "Chains of Doom".