Casmodon is a fictional character from the Machine Robo series. He is an evil member of the Gandora.

Casmodon was initially a Gandora Devil Commander, and later a Devil Invader. He specilizes in swamp and ocean combat. He turns into an alien aircraft. Because of his mechanoid nature he does not need to breath oxygen and is resistant to cold, but is vulnerable to intense magnetic fields. Casmodon's weapons include his Devil Sonic Cannon, Casmo Maser and Bind Sword.

Casmodon was killed many times in the series, and was continually brought back to life by the Gandora. Initially an individual, but eventually multiple clones of Casmodon served in among the Gandora.

Casmodon first appeared in Machine Robo: Revenge of Cronos episode 11, "Pledging Love On the Great River". He worked in the Dakots settlement quarry where he forced Lord Bison to work for the Gandora. He was defeated by Vikung-Fu's Thunder Claw attack, which caused Casmodon to explode.[2]

Casmodon returned in episode 20, "The Man From Gandora". Baldas, Casmodon and Zarios attacked Battlerock, but he was saved by Rom Stol, who caused the three Gandora to explode by punching them.[3]

Casmodon and Zarios were among the Gandora troops in Cleo City in episode 21, "Angel of the Mind, Vikung-Fu - Protect". The two were assigned guard duty, but were bored with their posting. Casmodon suggested that he knew a place where he could find cute a girl, but Dinodora overheard them and threatened them. When Reina Stol sensed her brother needed her, she knocked out Casmodon and took his weapon.[4]

Baldas and Casmodon chased Rom Stol's convoy of refugees in episode 24, "Gather All Machine Robo". The pair of Gandora were shot, stabbed and left to burn on the cursed red desert sands.[6] 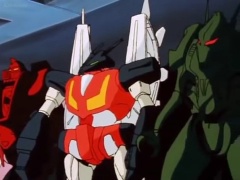 Casmodons appeared in episode 25, "Scramble! Land Commander 5" as part of a Gandora attack on the city lead by Garudi Stol. Note: This is the first episode where more than one Casmodon can be seen in the Gandora army.[7]

Casmodon appears in episode 30 "Spew Fire, Big Blaze Cannon" as part of the forces lead by Garudi Stol against Pro Truck Racer and his allies. When Garudi disarmed Pro Truck Racer of his Blaze Cannon Casmodon picked it up, only to have the cannon and his arm severed by Blue Jet's sword.[12]

A new mold. Turns from robot to alien aircraft.
This toy was released as GoBots 46 Vamp by Tonka.

A release of Casmodon for the Revenge of Cronos line.