From WikiAlpha
Jump to: navigation, search
For other uses, see Build-A-Bot.

Build-A-Bot is a series of custom action figures created by MasterShooter Collectibles in 2017.

Build-A-Bot figures are one-off custom figures made using leftover parts from their previous run. They are made to order customs designed to customer's specifications often used to recreate earlier releases or to make original characters.

The Build-A-Bot figures were announced in February 2017.

We are now taking orders for Build-A-Bot online sales. We delayed in doing so because we weren't sure how to take the requests without the parts board we had at TFCon. After all, how can you know what parts are available?

The way we'll do it is you send us any kind of image showing the colors you want. It can be anything from a picture of another companies robots you want us to match the color scheme of, to a stick figure drawn with different color crayons. Then we'll do our best to match it. You can look over our past releases to get an idea of the colors we have at our disposal. If we don't have a part in a color you want, then we'll respond telling you so. Once we finalize a bot, we'll build it. Some parts completely unavailable as of now are red arms, dark grey legs, light grey waist, and purple heads. Some other parts in other colors are EXTREMELY limited, so if you've got something specific you want, you'll want to order quickly.

The price per bot is $15. Shipping in the US is $7 and that's flat no matter how many bots you buy. To order, just message us here on Facebook or through our email ( [email protected] ) with the image of what you would like. We will ship internationally, but shipping will cost more depending on location.

Big Fish: This heroic Automated Robot wears many hats. Scientist, private detective, deep sea explorer and adventurer among others! This Shootermaster is always sticking his mustache in other people's business. Wherever he is needed, he'll be there. Sometimes utilizes additional equipment to upgrade his form.

Negashooter: A sinister Deceptive Construct who hates all organic life. The fact that he was built by an organic scientist is a constant source of anger.

Pump Action:A former neutral Shootermaster, Pump Action was once a friendly guard robot. He was recruited into the Automated Robots when his planet was destroyed in the great Robot Wars of 1987. Tired of not being taken seriously or called a "knockoff" he constantly reminds people his race of robots actually evolved first.

Twoknight: Once a larger Automated Robot with multiple alternate modes, Twoknight was heavily damaged in battle. Only being rebuilt as a Shootermaster saved his life. Now he's looking for payback. While he has adapted his new smaller body to take on modes similar to his larger form, he sometimes forgets he lacks the power of his old body. 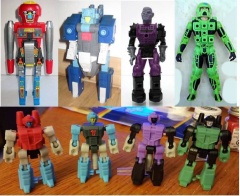 The Build-A-Bot figures share the a common design with most of the ShooterMaster toys. Individual figures are built-to-order unique designs.