Apollo is a fictional character from the GoBots series. He is a heroic Guardian who turns into a Saturn V rocket.

Apollo is based on the Machine Robo character Apollo Robo, although that toy was never imported into the GoBots toy line.

He should not be confused with Armada Skyblast, who was called Apollo in Japan, or with Autonomous Maximus, who has been known as Apollo. 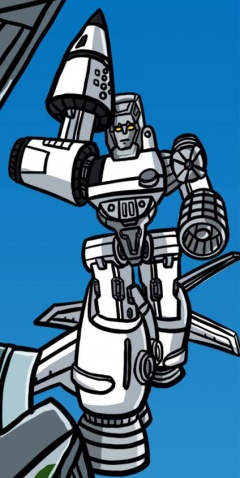 Apollo in "Goodbye Leader-1" by Christopher Colgin, in the Armada Skyblast body

In the story Cultural Appropriation by Fun Publications it was revealed that Apollo, Breez, Bullet, Decker Decker, Hi-Way, Jack-Attack, Loco, Pow Wow and Vain Train were sent to explore Level 29 when the Cataclysm threatened to destroy the GoBots home universe.

Apollo was featured in the 2016 Ask Vector Prime story Echoes and Fragments, set during the events of The Transformers: The Movie. The manipulations of the evil Gong and Sideways resulted in various GoBots, Rock Lords and Starriors swapping places with characters during the events of that film. Apollo was demolished by Astrotrain at the battle of Guardian City.[1]

Cy-Kill thought that Apollo, Path Finder or Spay-C appeared in the Transformers: Renegade Rhetoric episode 9 story "Cy-Kill For President". When Sky-Jack hacked into a human broadcast satellite for the Renegades he only narrowly avoided one of the space going Guardians, but this would have been before Apollo returned to GoBotic space.[2]

Apollo appeared in the episode 25 story "Brother's Keeper". He was captain of a primitive Guardian ship which returned to GoBotic space after a long mission and was captured by the Renegades. Cy-Kill subsequently captured all of the crew except Apollo, who escaped to warn the Guardians. Apollo returned with Leader-1's team to rescue the scouts, but two had joined up with the Renegades.[3]

Jig Saw appeared in the episode 62 story "In Zod We Trust" disguised as Apollo.

A new mold. Turns from robot to rocket. This toy was repurposed into the GoBot Apollo.

A release of Apollo Robo for the Revenge of Cronos line.