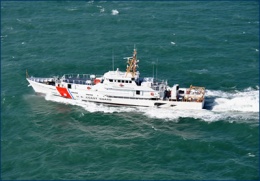 The USCGC Paul Clark was the sixth Sentinel class cutter. Like the previous five vessels she is homeported in Miami, Florida.[1] She was launched in April 2012.[2] She was delivered to the Coast Guard, for testing, on May 18, 2013.[3]

On September 13, 2013 the vessel repatriated 66 Cuban migrants to Bahia de Cabañas.[4] The migrants had been intercepted in four separate operations over the preceding days. Smaller vessels had intercepted four different migrant vessels. Coast Guard spokesman asserted that their interception of the migrant vessels saved lives because navigation between Cuba and Florida were so dangerous. The migrants were transferred to the Paul Clark for repatriation to Cuba.

On May 2, 2014 the Paul Clark intercepted a smuggling vessel off the coast of Haiti that was carrying a large volume of illicit drugs.[5] Her crew found 220 pounds of marijuana aboard the smuggling vessel, but the smugglers escaped.

The vessel is named after Paul Leaman Clark, who served as a Fireman in the United States Coast Guard.[6] Clark was staffing a landing boat during a large assault on a beach in French North Africa, during World War II, when the craft's two other crew members were wounded by a Luftwaffe fighter. Clark took command of the craft, took the wounded crew members to a Navy ship, for medical care, and then returned to his duties as a beachmaster.