Pinpointer is the Targetmaster partner to the Autobot Crosshairs.

In the Japanese Transformers: The Headmasters anime series the Targetmasters are not Nebulans at all, but robots from the planet Master.

Pinpointer was a biomass-recycling engineer on Nebulous. As such, he shares his binary bonded partner Crosshairs concerns for the effiency and avoiding waste. He’s very businesslike and can be brief in his words to the point of appearing rude. But he is very reliable and an ideal Targetmaster. Pinpointer transforms into a dual rocket-propelled grenade launcher who can lock on a target in less than .0003 seconds but usually trusts crosshairs to tell him when to shoot. He can be fired by hand or mounted on and operated by crosshairs in vehicle mode. In weapons mode, Pinpointer often suffers from nausea and dizziness as a result of the exhaust fumes he inhales from his own grenade firings. This can severely reduce his accuracy.

Pinpointer first appeared in the Transformers episode "The Rebirth, Part 1" as a sharpshooter among the rebel Nebulan group lead by Gort. In part 2 the Autobots copy Targetmaster technology from the Decepticons and Pinpointer is converted into the gun used by Crosshairs. In part 3 the Autobots and their Nebulans travel to Cybertron for the final showdown with the Decepticons. He then returns to Nebulos to rid the planet of the Hive's machines.[1]

Crosshairs and Pinpointer appeared in the 2001 3H Enterprises story "Departure" where they were part of the rescue team lead by Hot Spot that recovered Arcee from a horde of Nightbird clones, but was unable to save Daniel Witwicky and Wheelie.

Crosshairs and Pinpointer had a single page biography printed in the Transformers: More Than Meets The Eye comic series. 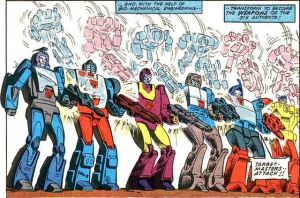 Pinpointer first appeared in issue #4 of the Marvel Comics Headmasters comic in a story called "Brothers in Armor!!" where he volunteered to be binary bonded to Crosshairs as his Targetmaster partner. The Autobots then fled Nebulos for Earth in an attempt to lure away the Decepticons.[6]

Although Pinpointer is not depicted, in issue #38 of The Transformers the Autobots and Decepticons from Nebulos arrive on Earth. 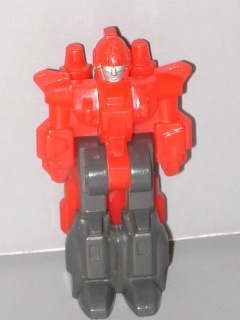 A recolor of Armada Firebot. This toy was repurposed as Shattered Glass Pinpointer.

Pinpointer is the small partner to Human Alliance Tailpipe.