Ian Roberts is a fashion and fitness model[1] from Bristol, United_Kingdom. He is best known for a series of posters he featured in including L’Enfant[2], which sold over 2 million copies worldwide. This poster was a remake of the famous Athena poster L'Enfant (Man and Baby). Ian is also remembered for a commercial he featured in for Harley-Davidson.[3]

Prior to modelling Ian was an amateur boxer, he joined Bristol's Broad Plain Boxing Club and made his debut alongside future WBC Super-Middleweight champion, Glenn Catley, who at the time boxed for Empire ABC, both recording stoppage wins. Ian boxed many times for Broad Plain boxing club and also went onto represent the West of England as a boxer.[4]

As well as photographic work Ian was also appeared in a number of commercials and television work including an appearance on the iconic cult TV show The Hitman and Her.[11] 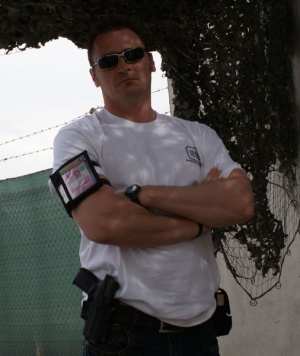 Ian Roberts on base in Kabul, Afghanistan

Alongside his modelling work Ian was head of security at Bristol's famous Lakota.[12]

Following his career as model Ian Roberts worked as a defence contractor in Kabul, Afghanistan in 2009-2010.

Ian is now a business and property owner. He is a director and shareholder of Nursing Solutions Ltd[13] the largest independent nursing and care agency in the south west and Jobhub.biz Ltd[14]. Ian is also an owner of investment property both here in the UK and in the Algarve, Portugal.

Ian is very into his gym and fitness and is still an avid follower of boxing.