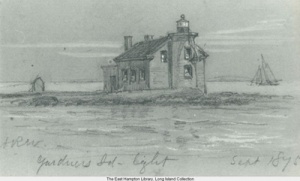 Gardiner's Island lighthouse was a navigational aid built off the tip of Long Island, NY, in the mid-19th century.[1][2]

Locals testified before the National Lighthouse Board that a lighthouse was necessary because at least 13 ships had wrecked themselves on the sandbar.[3]

It was built, of stone, on a long sandbar that extended from the northern tip of Gardiner's Island in 1855.[1] In 1892 a large storm washed away part of the sandbar, turning its northern tip into an island, Gardiner's Point Island.

The lighthouse keeper in 1892 decided the lighhouse was unsafe, and resigned. His replacement, a Jonathon Miller, would also decide the structure was unsafe, and moved most of his family to the mainland.[1] His eldest son remained to assist him. His fears were well placed, as during a storm in February 1894 Miller felt the structure suddenly collapse. Miller's son was crushed, while Miller survived.

The lighthouse was not replaced.[1]

According to The New York Times Congress was considering either replacing the lighthouse, for $20,000, or protecting it with a $5,000 seawall, at the time of the disaster.[4]