The Circle of Poxxus one of the legions in the Mythic Legions fictional setting. 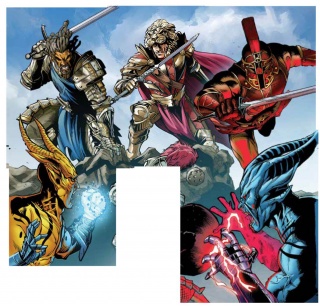 A collection of witches, warlocks, demons, Djinn, sorcerers, and assorted wielder of dark magic. Their ranks are lesser in numbers, but collectively more powerful. In service of the Dark Sorcerer Poxxus, exiled ruler of the Netherrealm. Among their legions are the Shadow Elf Warriors.

Raised from the Netherrealm ages ago by the dark sorcerer Poxxus, Azhar and his brother Zazhar are the central powers behind The Circle of Poxxus. Imbued with the gift of creation, Azhar has the power to create life where none exists. Azhar and his brother, have spent many years searching the world for the legendary talisman said to be the key to freeing Poxxus and the ancient evils from their eternal imprisonment. Only once that goal has been met can he rest in the knowledge that he will be rejoined with his master.

If Elves represent the purest of bloodlines and Vampires a spoiled distortion of them, then Shadow Elves dwell somewhere in the murky middle of the two. With both the elegance and power of the Elves and the savagery and bloodlust of the Vampires, the Shadow Elves should not be underestimated or trifled with. Their almighty King Malachi Cinderhorn is a cunning warrior, but his charm and silver tongue could be his most deadly weapons. Like all Shadow Elves Malachi harbors an underlying jealousy of Elves that feeds an intense hatred for all Elvenkind, and especially for their Queen, Artemyss Silverchord.

As one of the last remaining Uubyr in existence, Malynna has sought refuge in the dark corners of Alkyrium where she seeks to refine her dark magical abilities into a devastating and deadly weapon. An ancient mixture of orc and vampire bloodlines, the Uubyr have been shunned and despised despite their immense inherent magical potential. Under the protection of Malachi Cinderhorn and his Shadow Elves, Malynna the Malevolent has sworn to return The Soul Spiller to Lucretia and the Vampire kingdom.

Powerful yet peaceful, the cloven races are widely known for their heroic and noble nature. Unfortuately Shadow Minotaur are nothing of the sort. Their creation can be traced back to the First Age when Poxxus' agents stole away many woodland creatures and imbued them with Dark Magic. Mightily adept at magic, the Shadow Minotaur are a formidable element for the Circle of Poxxus. Torrion, a young Shadow Minotaur with an unusual proficiency for spellcasting, has been given the great honor of representing Poxxus in the secret meeting of the Dark Factions known as the Covenant of Shadow.

A lesser demon from the same Netherrealm that was once home to the great demon king Azahazzar, Xarria is one of the top generals in the Circle of Poxxus. With a gift for casting dangerous and exotic spells, Xarria’s power rivals that of faction leaders Azhar and Zazhar. Often at odds with the powerful pair, she is careful not to reveal her true ambitions in the event that Poxxus returns and restores Azahazzar to his true form.

Once an all powerful demon king of the Netherrealm, the mighty Azahazzar was split in two when Poxxus summoned him into the world of Mythoss. Zazhar and his brother Azhar are the malicious result of that split. Cursed with the power to destroy life with a mere touch, he is a chilling reminder of life's true frailty. Still bitter that he is only half of the demon he once was, Zazhar aggressively fights for the return of Poxxus in hopes that he may one day be restored to his former self.