From WikiAlpha
Jump to: navigation, search
For other uses, see Zod.

Zod is a fictional character in the GoBots series introduced in 1984. He is a gigantic evil monster GoBot.

Zod is a giant, even among his fellow GoBots. Savage and bestial, he is one of Cy-Kill's most powerful weapons. Zod is considered the "Godzilla" of the GoBots.[1]

All good GoBots fear the wrath of Zod, the Enemy GoBot's ultimate weapon. The incredible Zod is the part animal, part robot monster that wreaks havoc on the planet GoBotron. He lurches recklessly,-trampling and feeding on Zod fearing Friendly GoBots. Even though at times it seems Zod is everywhere-the good guys do have one chance. They can deactivate him by thrusting a weapon deep into his vulnerable nerve center. 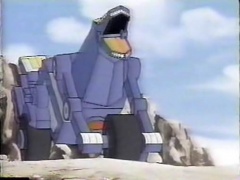 Zod in the Challenge of the GoBots episode "Destroy all Guardians"

Zod is left on GoBotron during Cy-Kill's initial trip to Earth. He orders Fitor to not use Zod against the Guardians, as he will have use of him later.[2]

Scooter used a hologram of Zod to make the Renegades flee.[4]

In the Eagle comic strip Robo Machines, Cy-Kill performed an operation on his master to convert him into Zod. Zod attacked the Command Centre, shooting down Royal-T, and later killing Carry-All. Zod still possessed the intellect of Stron-Domez, and was able to design the Devil Invaders, and oversee construction of the first Casmodon. However, soon after his stabilisers were disabled after being attacked by the Security Forces, and Cy-Kill abandoned him.

In the story Cultural Appropriation by Fun Publications it was revealed that large numbers of Guardian and Renegade weapons, including Zods, remain on Level 1 while the various GoBot and Rock Lord teams explore other Levels.

Zod appeared in the Transformers: Renegade Rhetoric episode 26, "Attack of the 50 Foot Guardian", where he was easily dispatched by Scooter when the Guardian had become a giant.[5]

A motorized toy. Came with a lance that could deactivate him by pressing a button on his chest.[6]