Zigzag (also known as Zputty) is a fictional character from the Transformers series. He was introduced in 1988 as one of the Targetmasters for the Decepticon Needlenose.

Zigzag is a beach bum who transforms into a twin electrostatic overloader rifle. He is partnered with the Decepticon Needlenose.

Zigzag should not be confused with the GoBot Zig Zag.

Zigzag was an unhappy hovercraft repairman on Nebulos. His inability to properly use a laser welder made him particularly ill-suited for his job. Usually the vehicles that he was assigned to repair were worse off after he worked on them. His fellow workers ridiculed him for his ineptitude. They derisively called him "Ziggy" rather than his real name. Seeing an alliance with the Decepticons as a way to get even with his tormentors, he eagerly offered his services to the leader of the Nebulos-based Decepticons, Scorponok, who happily accepted him into the ranks of his warriors. After putting him through the bio-engineering process, Scorponok paired him with Needlenose. The Nebulan gave himself the code name "Zigzag," which he thought sounded strong and put an ironic twist to his insulting nickname. However, the Decepticons soon found his services to be as wanting as had the Nebulans. Zigzag transforms into a twin electrostatic overloader rifle, which can disable a mechanical opponent by flooding his circuits with a surge of electricity, causing him to overload and shut down. Some of his victims even explode. However, Zigzag's accuracy is poor, so most targets escape unscathed. Zigzag often runs out of energy before he hits a target.

Needlenose appeared in the "Matrix Quest" story working for Thunderwing in issues #62-#65. He carries two guns that look like his Targetmaster partners, but they never spoke or transformed.[1]

Needlenose and his Targetmasters had a biography printed in the back of issue #64 of the US Marvel Transformers comic. [2]

Needlenose and his two Targetmasters appeared in the Fun Publications story "Cheap Shots", where they were employed by Ruckus as part of the Mayhem Attack Squad against the Autobot Nightbeat.[4] 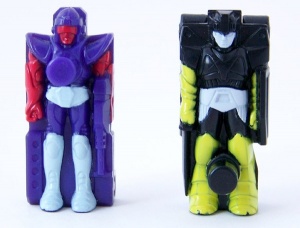 A new set of figures; Zputty is a recolor of Generations Holepunch and Timelines Cline.