Zaid Binsallah Mohammed Il Bhawith is a citizen of Saudi Arabia, who was held in extrajudicial detention in the United States Guantánamo Bay detainment camps, in Cuba.[1] His Guantanamo Internment Serial Number was 272. American intelligence analysts estimate that Al Bahooth was born in 1982, in Qasim, Saudi Arabia.

Mohammed Il Bhawith was captured in Pakistan in December 2001 and was transferred to Saudi Arabia on December 28, 2007.[2]

The factors for and against continuing to detain Al Bahooth were among the 121 that the Department of Defense released on March 3, 2006.[3] 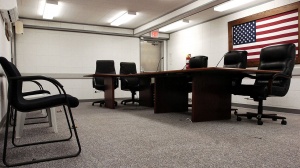 Hearing room where Guantanamo captive's annual Administrative Review Board hearings convened for captives whose Combatant Status Review Tribunal had already determined they were an "enemy combatant".[5]

The factors for and against continuing to detain Al Bahooth were among the 121 that the Department of Defense released on March 3 2006.[3]

The detainee spent one and a half months at a Taliban training center located outside Kabul, Afghanistan where he received one week of training with an AK-47 rifle.

The detainee was captured by the Pakistani government after crossing the border in the Nangahar Province in December 2001.

On January 9, 2009 the Department of Defense published the records for the third set of Administrative Review Board hearings, conducted in 2007 and early 2008.[8] According to those records no review was scheduled for Al Bahooth in 2007. According to the records of the 2005 and 2006 Board hearings, those boards had not recommended his repatriation.[9][10] Al Bahooth was repatriated in spite of the Office for the Administrative Review of Detained Enemy Combatants recommending his continued detention in US custody.