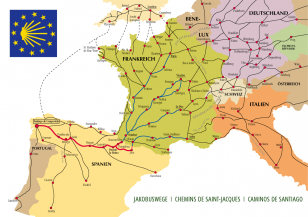 Map of the Way of St. James in Europe

According to traditions the saint's remains were buried at the cathedral. Many follow its routes as a form of spiritual path or retreat for their spiritual growth. The route is also popular with outdoor enthusiasts and mountain bikers.

The Way of St. James consists of several routes such as the Camino Portugues, Camino del Norte, Camino Ingles, Camino Primitivo, Via de La Plata and many more. The most popular route is the Camino Frances, which begins in Saint-Jean-Pied-de-Port, France.

The road was a popular site during the Middle Ages. However, historical factors such as the Black Death , the Protestant Reformation, and political upheaval in 16th century Europe led to its decline in importance.

By the 1980s, there were only a few hundred pilgrims registered with the Santiago Pilgrims office. The road was declared in October 1987 as a European Cultural Route by the Council of Europe. In recent times, the route has attracted an increasing number of contemporary pilgrims from around the world

Since 2013, the Camino de Santiago has attracted more than 200,000 pilgrims each year, with an annual growth rate of more than 10 percent. Pilgrims come mainly on foot and often from nearby cities, requiring several days of walking to reach Santiago. The Camino Frances or French Way gathers two-thirds of the walkers, but other minor routes are experiencing a growth in visitors too. The French Way and the Routes of Northern Spain are listed in the World Heritage List by UNESCO.