Waspinator (Waspeeter in Japan) is the name of several fictional characters from the Transformers series. The first Waspinator was introduced as Beast Wars Predacon aerial attack specialist who turned into a giant wasp in 1996.

Beast Wars Like a rattlesnake's tail before an attack, a chilling sound buzzes in the distance as if to forecast approaching danger. Suddenly from the sky the giant wasp appears, revealing its monstrous face and bulging eyes as it streaks down for an aerial attack! The Waspinator launches its secret wing missiles, striking the helpless victims below with the poisonous power of a robotic cyber-sting!

Beast Wars Transmetal: After the quantum surge, Waspinator became a meched-out, armored wasp with the ability to change into a fighter-jet as well as a bio-genetically-enhanced robot. His personality, however, did not change much; he's still high-tempered, aggressive, and dangerous when angered. Only now Waspinator is faster, armed with a toxic stinger and more driven in his mission to wipe out the Maximals forever!

Timelines Scout: In his own mind, "Waspinator" is destined for a glorious reign atop the Predacon hierarchy. Sadly, his actual abilities fall very short of this ideal. It is almost as if the Predacon warrior is cursed. In vehicle mode he can achieve Mach 3.2 and is equipped with the ability to generate a localized anti-gravity field that allows him to stop almost instantaneously with little or no drift. His primary armaments are two machine gun cannons built into the sides of his nose cone. In robot mode, Waspinator wields a stun rifle that fires blasts of circuit-disrupting energy. His optic sensors can emit destructive blasts at any target he is looking at. Despite all this, his comrades do not respect him and his enemies do not fear him. In battle, he is often dispatched in the most gruesome manner possible, however Waspinator has an undeniably stubborn spirit and refuses to give up his dreams. Megatron recognizes this quality and seeks to exploit it to its maximum potential for his own benefit.

Generatons: Finding himself in a world thousands of years distant from the one he once knew, Waspinator did the only thing he could – found someone strong and put himself under their command. Sure, he's being manipulated. And sure, he’s getting blown to pieces just as regularly as he used to. But at least the guy he’s working for now knows how to put him back together properly.

Timelines Thrustinator: Vehicon Thrust and Predacon Waspinator were once two owners of the same spark. After the Battle for the Sparks of Cybertron, the two identities were merged to more or less form a single individual: Thrustinator. Shortly after this reformatting he was flung through the multiverse and landed in Axiom Nexus where he encountered his new partner, Heinrad. Heinrad constantly talks about time, possible time, anti-time, looped time, inverse time... All of this gives Thrustinator a headache. Add in the nebulous stretches of the multiverse and it's a full-blown migraine. For a while, he had tried to follow along, but he soon realized that he had no idea what the time traveler was talking about. All Thrustinator knows is that he can't go home until he and Heinrad fix the past and prevent a catastrophe. He wishes they'd just hurry up and fix it already.

Wired Magazine once nominated him as one 12 most ridiculous Transformers of all time.[1] In 2011, Waspinator was the second fan choice Transformer to be put in the Transformers: Hall of Fame.[2]

In the Transformers Collector's Club Magazine for 2013, Waspinator reappeared, still bearing traces of his Vehicon persona of Thrust and going by the portmanteau Thrustinator. In the storyline, his contact with Starscream's immortal Spark resulted in his gaining Starscream's ability to time travel and extended lifespan. 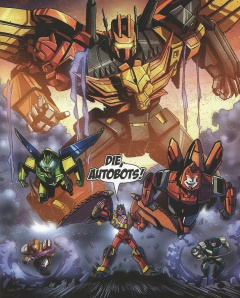 Megatron commands Attack Squad 3 in Transformers: Dawn of the Predacus 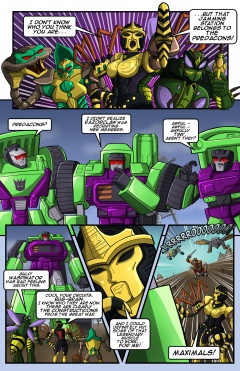 Quickstrike, Blackarachnia and Waspinator discover the Constructicons in Dark of Wreckening

Waspinator appeared in Days of Wreckening. In this story Blackarachnia, Quickstrike and Waspinator discover three Constructicons on prehistoric Earth and are confronted by the Maximals and Wreckers [4]

In the toy line, Waspinator was a deadly and efficient aerial warrior, who ended up becoming a transmetal with a tertiary mode of a fighter-jet. His jet mode slightly resembled a Mirage 4000.

A recolor of transmetal Waspinator.

A Deluxe sized toy was released for Thrust by Hasbro.

A smaller version of Thrust was also made as a toy which was included in children's fast food meals.

A recolor of the Motorcycle Drone toy that was only released in Japan, as part of their 2005 Beast Wars Returns.

There were plans to release a Transformers: Universe toy of Waspinator, a repaint of the transmetal Waspinator, part of a Halloween Horrorcons 2 pack, but the toy would never be released.

In 2005 the original Waspinator toy was repainted in more show accurate colors and re-released for the 10th Anniversary of Beast Wars.

A toy of Waspinator in his pre-Beast War vehicle mode was released as a BotCon 2006 exclusive toy. This toy is a remold of Machine Wars Skywarp. He turned into a Saab Gripen jet.

A repaint/retool of Dirgegun from Beast Wars II, combining elements from both Waspinator and Thrust.

Waspinator, also known as Wasp, is an Autobot turned Predacon from the Transformers Animated series.

Originally an Elite Guard cadet alongside the likes of Bulkhead, Bumblebee, and Ironhide, and quickly impressed Sentinel Prime with his abilities and control. However, his mockery of his less adept classmates quickly earned Bumblebee's ire, especially when Longarm suggested that there might be a Decepticon spy in their midst. Wasp was eventually arrested for treason, with the Autobots unaware that Longarm-the true spy-had framed him; Wasp would eventually become obsessed with revenge, with confinement driving him to unstable behavior such as referring to himself in the third person. Years later he escaped from prison and, after eluding Elite Guard forces and passing through a Spacebridge, set his sights on the bot he held responsible for his unjust imprisonment: Bumblebee.

Wasp eventually tracked down his nemesis and altered Bumblebee's voice and appearance to match his own while he took on Bumblebee's-though with his helmet faceplate up to conceal the differences between them-intent on seeing Bumblebee sent back to prison in his place. However, his deception was eventually penetrated and he continued running from both the Elite Guard and Optimus Prime's team. This eventually led him to Dinobot Island, where he made the acquaintance of Blackarachnia, who mutated him as an experiment to enable her return to a fully technological Cybertronian form. Now vastly stronger, capable of flight, and possessing an insectoid alternate form, Wasp renamed himself Waspinator.

Bumblebee later apologized to his former rival, who responded that "Wasp forgive Bumblebot...but WASPINATOR NEVER FORGIVE!" Waspinator's new form became unstable due to the transwarp energy used in his mutation, and he sought revenge on Blackarachnia. However, the two Predacons were eventually enveloped in the transwarp energy, which transported them to an unknown location. His body badly damaged but still functional, Waspinator started dragging himself way with talk of "plans" while Blackarachnia encountered some local wildlife.

Had the series not been cancelled, the following season of Animated would have featured Waspiantor and Blackarachnia at the heart of a growing Predacon army.

"Ask Vector Prime" later revealed that this Waspinator-or possibly an alternate version-had his Spark expelled from his body and driven through a temporal anomaly on Dinobot Island. It was later recovered by a version of Transformers: Robots in Disguise Jhiaxus and used to create a new version of Thrust. Though now a gifted sharpshooter, he was unable to completely shake the memories of his error-ridden past, and he often exhibited fear in danger. He also developed a strange friendship/rivalry with Obsidian. [7]

A green recolor of the Animated Deluxe Bumblebee. This was mentioned, but not yet shown at the 2009 BotCon. It was later shown in the slide show at the 2009 San Diego Comic-Con International. On the back of the packaging of Deluxe Cybertron Mode Ironhide, a picture of the figure is shown. It is unknown if Hasbro will indeed release this figure.

The Japan release version by Takara Tomy is virtually identical to the Hasbro version, with the exception of a silver wasp head and a purple Decepticon emblem.[9] Set for release in Japan on August 2010.[10]

According to "Ask Vector Prime", this figure represents an alternate Thrust with the Spark of Waspinator.

WASPINATOR not like other brick-bots! WASPINATOR looooooves being taken apart! Oh yes! There is nothing WASPINATOR loves more than being just a head on a table! Please disassemble WASPINATOR!

Hobby: Getting blown up.

Part of the blind packed preview wave of Kreon Micro-Changers.

Waspinator is a heroic Predacon from the Shattered Glass stories by Fun Publications.

As shown in "Shattered Destiny", Waspinator was a member of the Darksyde's crew under Megatron. They were battling the Axalon when both ships were pulled through an unexpected dimensional rift and crash-landed on prehistoric Earth. Waspinator and the others disembarked to find Depth Charge outside.

Intended to be a Universe recolor of Transmetal Waspinator. Although never released, several test shots of this figure were sold on ebay.
This toy was repurposed as Shattered Glass Transmetal Waspinstor.[11]