Filling in part of the mouth of the Keating Channel, to construct Villiers Island.

Villiers Island is a 54 acre area in Toronto's Port Lands being made into an island as part of Waterfront Toronto's Port Lands Flood Protection Project.[1][2][3][4] To prevent flooding from the Don River, a channel is being created to extend the river south and then west into Toronto Harbour providing another outlet and a more natural mouth for the Don River. The new channel effectively creates the island, which is also bounded by the Keating Channel and Toronto Harbour. Mixed-use residential development is planned for Villiers Island.[5][6][7]

The new island and Villiers Street are named for Major Villiers Sankey (1854–1905), a British Army officer and the city's early surveyor (1888-1905).[8][9] Sankey was born in Ireland and came to Canada sometime after he passed his India Civil Service exams in 1872.

A full build-out of Villiers Island will feature:[5]

The new channel will have natural curves, and will have more natural banks, with natural plants that could provide habitat for migrating birds and wildlife. The channel will empty into Toronto Harbour at what is now the Polson slip. The Keating Channel had mooring for multiple freighters. Plans for Villiers Island included adding more natural looking curves on the Keating Channel's southern bank.

The island lies on former industrial land, first created through landfill. The area will be cleared but buildings considered to have heritage value will be preserved.[10] These will either be moved to higher ground, or left in declivities, when additional landfill will be used to raise the ground level two metres in the event of rare extraordinary flooding.[11] More recent structures will be demolished.[12] Some existing industrial uses have been moved to the main shipping channel to the south.

Just south of Lake Shore Boulevard, Cherry Street will be relocated slightly to the west with new bridges crossing the Keating Channel. The Don Greenway, a new river valley, is being constructed south from the Don River, crossing Commissioners Street under a new bridge, before turning west into Toronto Harbour. This new channel will allow high water from the Don River to flow move easily south by avoiding the 90-degree turn into the Keating Channel.[13][14][15] 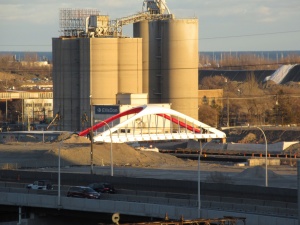 The first of the bridges to be placed, the transit and pedestrian span over the shipping channel
Main article: Bridges to Villiers Island

There will be four new bridges providing three access points to the future Villiers Island. All bridges are being built by Cherubini Bridges and Structures in Dartmouth, Nova Scotia at a total cost of $100 million. All three locations will have provision for future streetcar service, which may be a future expansion of the proposed East Bayfront LRT. All four bridges will have the same esthetic design and each span will have a curved steel dome (designed by CIG Architecture of the Netherlands) rising over the road surface. The builder expects the last of the four bridges to be shipped in 2022. All bridge spans are pre-assembled in Dartmouth and shipped on a barge via the Saint Lawrence Seaway.[15]

There will be a provision for three additional bridges in the future:[16]

Villiers Island is a product of Waterfront Toronto's Port Lands Flood Protection Project. As of 2020[update], water from the Don River make a 90-degree turn into the Keating Channel, creating a bottleneck for water and a risk of flooding.[6] To eliminate this bottleneck, a new channel will be dug to extend the Don River south from the east end of the Keating Channel, and then west between Commissioners Street and the Ship Channel. The new channel will be in a man-made naturalized river valley that will end at the north side of Polson Slip, the location of the new mouth of the Don River. The new Don River channel will effectively create Villiers Island.[5]:B,C 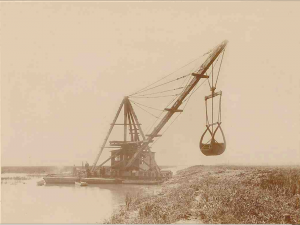 The site of Villiers Island and the rest of the Port Lands were originally a marsh which was dredged and filled with landfill around the turn of the 20th Century.

The island was first part of the "Ashbridge's Bay" wetlands around the original mouth of the Don River, connected to a sandbar that is now the Toronto Islands. By the turn of the 20th century, the marsh had become polluted, and the city filled it with landfill, and devoted it to industrial purposes.[19] Some of the early twentieth century landfill was polluted, contaminated with heavy metals or toxic chemicals. The industrial enterprises were also polluting, including acres of petroleum tank farms and berms of road salt.

The city had also canalized and straightened the lower reach of the Don River, so it flowed straight for 5 kilometres (3.1 mi) from Bloor/Danforth to what is now Lake Shore Boulevard, where it made a right hand turn and ran 1 kilometre (0.62 mi) west into the Keating Channel.[19] This right-hand turn caused a significant build-up of silt and debris that had to be removed by the port authorities regularly to minimize flooding of the surrounding area after a storm.

By 2000, the area around the mouth of the Don River had declined in usage and significant areas were vacant. These lands were not developable due to the cost of remediating the polluted lands, and the lack of flood protection. To "unlock" the area for development, Waterfront Toronto proposed to "naturalize" the mouth of the Don River.[19] In conjunction with this, berms were built at Corktown Commons. The area between the Keating Channel and the new naturalized mouth would become Villiers Island, to be redeveloped for a mix of residential and open space uses.

In October 2017, the Port Lands Planning Framework and Villiers Island Precinct Plan were adopted by Toronto City Council. The Port Lands Flood Protection project is being funded by all three orders of government.[20][21] The design for Port Lands Flood Protection was established through an Environmental Assessment, approved in 2015.[22] The Villiers Island Precinct Plan establishes design and development objectives for the area. The plan was developed by Urban Strategies Inc. of Toronto, with support from Arup and other firms, with the City of Toronto and Waterfront Toronto.[18]

In March 2020, lakefilling work was completed at the north-west tip of the future Villiers Island. The work would strengthen the dock walls at Essroc Quay to prevent their collapse during water surges.[23]