Victorion is a fictional character in the Transformers series introduced in 2016. She is combined form of the all-female Rust Renegades team. She was created via a Transformers fan poll held by Hasbro.

In Transformers: Combiner Wars, Victorion is a combiner born through the Enigma of Combination, similar to her IDW Publishing incarnation and in contrast to other combiners produced through technological means. Her purpose is to bring peace to the galaxy, to which end she seeks to prevent the Enigma from falling into the wrong hands. She arrives at the Council of Worlds' palace and confronts Devastator to prevent him from seizing the Enigma, only to join forces with him when Starscream takes it for himself. However, the pair are helpless against the Enigma's power, which combines the two of them and the lifeless Menasor and Computron with Starscream to form an even larger combiner. They are later freed after Starscream is killed by the combined efforts of Windblade, Optimus Prime, Megatron, and Metroplex, and Windblade bestows the Enigma upon Victorion, leading to the Combiners' grateful departure.

Victorion is voiced by Anna Akana. 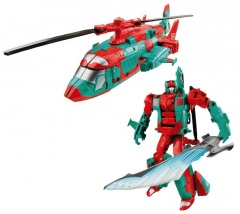 A combiner set consisting of six remolded figures who combine into Victorion: Pyra Magna from Hot Spot, Skyburst and Stormclash from Alpha Bravo, Dust Up from Dead End, Jumpstream from Breakdown, and Rust Dust from Legends Groove. With the exception of Rust Dust, the set was later recolored into Unite Warriors Megatronia.