From WikiAlpha
Jump to: navigation, search
For other uses, see Ultra Magnus.

Ultra Magnus is the name given to the Japanese character God Magnus in the English dubbing of the Car Robots series as Transformers: Robots in Disguise.

The first new character to bear the name of Ultra Magnus since the Generation 1 original was known as God Magnus in the Japanese 2000 line, Transformers: Car Robots. God Magnus owed his name and alternate mode to Ultra Magnus (and also to Godbomber, an earlier character who disassembled to form armor for his Prime-styled partner), so when the series was translated for release in the West in 2001 as Transformers: Robots in Disguise, the name change was obvious, and Ultra Magnus returned to TV screens for the first time since the G1 series.[1] Later, a smaller Spy Changer figure of Magnus, unique to Robots in Disguise, was released

Ultra Magnus transforms into a car carrier capable of transporting other Autobots such as the Autobot Brothers. In addition to his remarkable strength and fighting ability, he is armed with the "Blue Bolts" - a variable-configuration weapon of immense destructive power. His weapon can either fire as a rapid fire gun or as a high powered laser. His back-mounted jetpack allows for periods of short flight. In addition to these new abilities, for the first time, was able to combine with Optimus Prime (Robots In Disguise toyline) forming Omega Prime.

Ultra Magnus was a reoccuring character in Transformers: Robots in Disguise, the English dub of Car Robots. As a nod to their origins in Generation 1, Ultra Magnus and Optimus Prime (Fire Convoy in Japan) were created at the same time by Alpha Trion, but when Prime was chosen to carry the Matrix, Magnus felt passed over, and was left carrying a grudge against his brother. That grudge eventually exploded into violence when he arrived on Earth with the intention of taking what he believed was rightfully his - by force, if necessary. Before meeting up with Optimus, Magnus fought and easily defeated the Decepticons on his own (not even Ruination could beat him). When he met Optimus, he offered Magnus a chance to join him, but Magnus outright refused and attacked him. Severely injuring Prime, who refused to fight back, Magnus tracked him to a desert island, where he pretended to offer him the hand of friendship, only to attempt to absorb the Matrix for himself, forcing the brothers into the combined form of Omega Prime (God Fire Convoy). Through this link, Magnus was also able to channel the power of the Matrix, which he used to supercharge the Autobot Brothers into newly-colored forms. Although Magnus remained a free agent, refusing to take orders from his brother, his animosity dwindled and he frequently helped the Autobots by combining with Prime to battle the Predacons and Decepticons. As Omega Prime, they faced Galvatron together at the Earth's core and successfully defeated him once and for all.

Note that in Car Robots, there is not one singular Matrix, but multiple ones, each held by a high-ranking Autobot. Magnus already possesses a Matrix, and simply seeks to steal the power of Prime's to increase his own (the overspill resulting in the supercharging of the Autobot Brothers).

Although the Robots in Disguise incarnation of Ultra Magnus did not return to TV screens, his toy was re-released on the shelves of Sam's Club in 2003's parallel-universe-spanning Transformers: Universe line, slightly redecoed with bluish-black parts in place of his dark blue ones. Featured in the pages of the Transformers: Universe comic book exclusive to the Official Transformers Collectors Convention, this character was established to the RiD Magnus, who, along with Optimus Prime, was plucked from his home universe at a point after the conclusion of Robots in Disguise to become part of a battle between armies gathered from across space and time by Unicron and Primus. Led by Optimus Primal into the final battle, the combatants found their conflict halted when Unicron began to crumble beneath them. Primal's team gathered together to escape through a portal, but when Magnus and Prime passed through, they did not find themselves where they expected...

This character appeared in the 2004 BotCon voice actor play, and was seemingly yet another new Ultra Magnus taken from a parallel dimension to that of the Robots in Disguise fiction.

The Voice Actor Drama was written for OFTCC 2004 by Simon Furman, set after the events in the comics. Spy Changers Optimus Prime, Prowl, Ultra Magnus and Ironhide were among those taken from their world via teleportation beam by Unicron and his Decepticon minions. The Autobot forces opposing Unicron attempted to deflect the beam, which left them all trapped on an uninhabited ice-world. The Autobot forces teamed up to overcome the Decepticons led by Reptilion. Presumably the Autobots were then returned to their own worlds.

The character of also made one appearance in Dreamwave Productions' Summer Special in a story presented as being in continuity with the animated series, which pitted him against Scourge, as both denied and debated their Autobot heritage and relation to Optimus Prime. No further RiD stories were published by Dreamwave before their closure, as Beast Wars claimed victory over RiD in a poll to choose the next mini-series.

Prime and Magnus's toys were released once more in 2005's Transformers: Cybertron - exclusively to Costco, with Magnus's toy remaining unchanged from his Universe redeco - with bios which once again presented them to be the same characters from RiD and Universe. It was within the pages of the Cybertron comic available through the Official Transformers Collectors Club that the story was continued, as the portal through which Magnus and Prime had vanished in Universe transported them into the Cybertron universe; there, a black hole left in the wake of Unicron's destruction in that universe had caused multiversal ripples which had resulted in the collapse of Unicron in the Universe timeline the brothers had just departed, and materialized on Cybertron...

In the Cybertron universe, Cybertron was under attack by two of the Heralds of Unicron, Nemesis Prime and Ramjet. They had already damaged Alpha Trion, and while Ramjet engaged Vector Prime in a duel high above Cybertron, Nemesis Prime got past Sentinel Maximus and revealed his plan - he was going to use the Dead Matrix, a corrupted version of the Matrix of Leadership, to drain the lifeforce of Primus and use it to revive Unicron (destroyed in a black hole at the conclusion of Transformers: Energon). But he was confronted by the most unexpected foe of all - Omega Prime. Omega then split into Optimus Prime and Ultra Magnus, and while Prime attended to Primus, Magnus defeated Nemesis Prime. Informing Sentinel Maximus of what went on, they then stored the Dead Matrix away forever, unaware they were being observed by Soundwave.

Soundwave subsequently stole the Dead Matrix and threw it into the black hole, reviving Unicron, who took a nearby planet as his new body. Unicron attacked Cybertron again in the midst of a Mini-Con civil war, duelling with Sentinel Maximus and Omega Prime. The battle was inconclusive, but Unicron was driven away by Primus himself. The brothers recovered - only to receive Optimus Prime, bearing word of Vector Prime's death in battle. Prime and Magnus were subsequently seen planning the hunt for Unicron.

"Ask Vector Prime" would reveal that in an alternate reality, Ultra Magnus was a pupil of Alpha Trion's rather than a warrior, though he apparently still formed Omega Prime to help Optimus defeat Unicron. As Alpha Trion was about to perish, Ultra Magnus merged himself with the elder's dying form, creating Ultra Trion. [2] 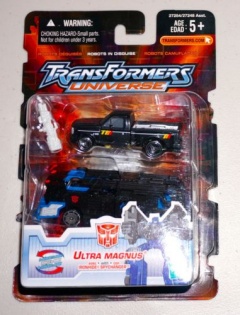 Similar to the Japanese release, only with the Japanese voice replaced with the English voice (with the phrase, "Ultra Magnus, Transform!"). Autobot emblems have been placed on the side panels in this version. Much like the Japanese version, this figure combines with Optimus Prime's normal robot mode to form Omega Prime, with a different set of voice and sound clips ("Optimus Prime, Ultra Magnus, Combine!" and "Omega Fire!").

The Spy Changer of Ultra Magnus was repainted as the Dairycon 2002 exclusive figure Campaign Car.[4]

The toy for this version of Ultra Magnus is a recolor of the Robots in Disguise toy and came packaged with Spy Changer Ironhide. This package was a Walmart store exclusive in 2004.