From WikiAlpha
Jump to: navigation, search
For other uses, see Ultra Magnus.

One major use of Ultra Magnus was in the American cartoon series Transformers Animated where he was protrayed as the leader of the Autobots on Cybertron.

In the Cartoon Network series Transformers Animated, Ultra Magnus serves as the Autobot commander on Cybertron and Optimus Prime's superior, and he sees Optimus as a born leader.[1] His head resembles that of the Generation 1 character's super robot mode. He wields a large war hammer called the Magnus Hammer, which can discharge massive amounts of electricity and command lightning bolts (sort of similar to the Marvel Comics hero Thor). He turns into an 8-wheeled missile launcher truck.[2] In doing Ultra Magnus' voice, Jeff Bennett emulates the voice of the late Robert Stack, who voiced Magnus in The Transformers: The Movie. 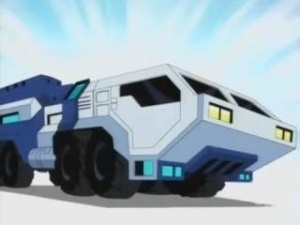 A bust of Ultra Magnus appeared in Master Yoketron's dojo as a member of their Cyber Ninja Corps in the episode "Five Servos of Doom" during a flashback of Prowl's training during the Great War.

During Ratchet's flashbacks in "Thrill of the Hunt", Ultra Magnus is shown ordering Ratchet to get Arcee and her access codes back no matter what. Then, Ratchet has more flashbacks during "Transwarped" when he remembers after getting Arcee's access codes, he followed Ultra Magnus and Highbrow to where Omega Supreme was built. Ultra Magnus informed Ratchet that Omega was built to be a doomsday weapon and the they have to do anything to win the war.

In the pilot of Transformers Animated Ultra Magnus learned that Optimus Prime's crew had discovered the Allspark and ordered them to stay put until it could be retrieved. He also told Prime not to try to be a hero; unfortunately Optimus disobeyed and had the Ark take off anyway, stating that "Ultra Magnus wasn't carrying the Allspark".

He comes to Earth personally in the episode "The Elite Guard" with his fellow Cybertron Elite Guard members Sentinel Prime, and Jazz. He took on an Earth-vehicle mode. After the battle against some out-of-control police droids and a fragment of the Allspark was retrieved, Ultra Magnus began to respect Optimus Prime as a commander and told Sentinel Prime that he can learn a thing or two from him.

He briefly appears at the end of "Return of the Headmaster" talking to the Primes about what happened, and then going to inform Cybertron Command about some important matters.

During "Mission Accomplished", he informs Optimus and his crew to pack up and get ready to head back to Cybertron. After Jazz detects an Allspark fragment, the latter character and Ultra Magnus head out to investigate. They fail and they get delayed getting to the train station where he get seriously ticked off at Optimus for disobeying and, for a while, not providing proof that there are Decepticons on Earth. When Starscream falls out of the sky, Ultra Magnus orders everyone to stand back and before the Decepticon blast him in the face at point blank range. He recovers and later takes Sentinel Prime and Jazz back to Cybertron to fight a Decepticon uprising.

He would later inform the earthbound Autobots of the escape of the traitor Wasp, telling them to keep an optic sensor out for him during "Autoboot Camp."

He appears in "Transwarped" in present time battling the Deception uprisings and then back on Cybertron where he figures out that the uprisings were too organized and deduced that Cybertron may have a double agent. He then sends Sentinel and Jazz to Earth to get an update from the Earthbound Autobots.

His next appearance is in "Where is thy Sting?", assuring Longarm Prime (Shockwave) that Sentinel, Jazz, Jetfire, and Jetstorm could proceed with their mission. Later, with Longarm's cover being blown, Shockwave savagely attacks him off-screen, leaving him gravely injured, and stealing his hammer. He is barely able to reveal the identity of his attacker to Ironhide. According to Alpha Trion in "Decepticon Air," Ultra Magnus is currently on 'spark-support.' By this time, Sentinel Prime takes over as the new Magnus. In "This Is Why I Hate Machines," the attack by Shockwave and the image of Ultra Magnus in the infirmary are used as propaganda in Sentinel's fanatical government policies. While on spark-support, Ultra Magnus is nearly destroyed by his own hammer when Shockwave attacks the infirmary, but is saved by Ratchet, who takes the hammer with him to Earth and promises to return it once Ultra Magnus recovers.

In a series of flashbacks by Optimus Prime during "Endgame Part 1," it is revealed that Ultra Magnus was the one who had expelled Optimus from Autobot Academy, pertaining to his involvement with the loss of Elita-1. However, due to his special fondness for the cadet, plus suspecting that Sentinel wasn't telling the entire truth about the incident, Ultra Magnus spared Optimus from total disgrace. Ultra Magnus pulled some strings to have Optimus assigned to a group of Autobots, (namely Ratchet, Bumblebee, Bulkhead, and later, Prowl), and put in command of a starship, (later revealed as Omega Supreme). He also gave Optimus the rank of Prime.

For a time, Ultra Magnus's ultimate fate was not revealed before the end of the series, but Derrick J. Wyatt stated that if a fourth season of the show was made, Magnus was to have died from his injuries.

The first toy for this version of Ultra Magnus was released in 2008 and transformed from a Heavy Expanded Mobility Tactical Truck to robot. He came with a spring-loaded Magnus Hammer and is armed with numerous guns mounted on his shoulders. The figure emits two sound effects and phrases as voiced by Jeff Bennett.

This toy was later recolored in a green, black, and orange theme, in homage to Generation 1 Roadbuster. The version released in Japan in 2010 had metallic paint and Japanese voice clips.