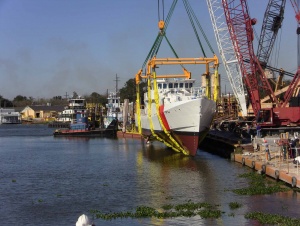 The USGC William Flores is a Sentinel class cutter of the United States Coast Guard scheduled to serve in Miami, Florida upon her commissioning.[1]

Like her sister ships, she is equipped for coastal security patrols, interdiction of drug and people smugglers, and search and rescue. Like the smaller Marine Protector class she is equipped with a stern launching ramp. The ramp allows the deployment and retrieval of her high speed water-jet powered pursuit boat without first coming to a stop. She is capable of more than 25 knots and armed with a remote controlled 25 mm M242 Bushmaster autocannon; and four crew-served Browning M2 machine guns.

She is named after seaman apprentice William Ray Flores who died during the sinking of the USCGC Blackthorn -- who is credited with saving the lives of fellow crewmembers.[2][2] In November 2011 Flores was honored by having the third of Coast Guard's Sentinel class cutters named after him.[3][4][5][6][7]