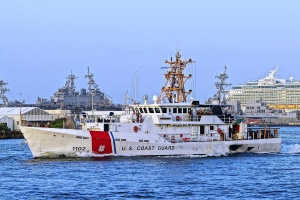 Like the other ships of her class, Richard Etheridge is named after an enlisted member of the Coast Guard.

Richard Etheridge is named after Coast Guardsman Richard Etheridge, the first African-American to command a life-saving station. Etheridge led the Pea Island Lifesaving Station crew of six in a daring rescue operation that saved the entire crew of the schooner E.S. Newman, which had become grounded in a treacherous storm in 1896.

The Sentinel-class cutters were designed to replace the shorter 110 feet (34 m) Island-class patrol boats.[7] Richard Etheridge is with a remote-control 25 mm Bushmaster autocannon and four, crew-served M2HB .50-caliber machine guns. It has a bow thruster for maneuvering in crowded anchorages and channels. It also has small underwater fins for coping with the rolling and pitching caused by large waves. It is equipped with a stern launching ramp, like the Template:Sclass2- and the eight failed expanded Island-class cutters. It has a complement of twenty-two crew members. Like the Marine Protector class, and the cancelled extended Island-class cutters, the Sentinel-class cutters deploy the Short Range Prosecutor rigid-hulled inflatable (SRP or RHIB) in rescues and interceptions.[8] According to Marine Log, modifications to the Coast Guard vessels from the Stan 4708 design include an increase in speed from Template:Convert/to, fixed-pitch rather than variable-pitch propellers, stern launch capability, and watertight bulkheads.[9]

Cite error: <ref> tag with name "maritime-executive2011-12-06" defined in <references> is not used in prior text.
Retrieved from "http://en.wikialpha.org/mediawiki/index.php?title=USCGC_Richard_Etheridge_(WPC-1102)&oldid=208543"
Categories: