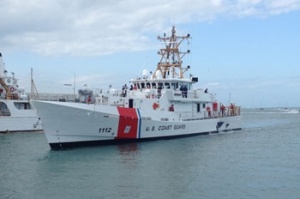 USCGC Isaac Mayo is a Sentinel class cutter homeported in Key West, Florida.[1][2] She is the twelfth Sentinel class to be delivered, and the sixth of six to be assigned to Key West.

Like her sister ships, she is equipped for coastal security patrols, interdiction of drug and people smugglers, and search and rescue. Like the smaller Marine Protector class cutters she is equipped with a stern launching ramp.[3] The ramp allows the deployment and retrieval of her high speed water-jet powered pursuit boat without first coming to a stop. She is capable of more than 25 knots and armed with a remote controlled 25mm M242 Bushmaster autocannon; and four crew-served Browning M2 machine guns.

She is named after Isaac Mayo, who served a surfman at a lifeboat station on Cape Cod.[2][4] Mayo was an employee of the United States Lifeboat Service, one of the precursor services that were amalgamated into the Coast Guard.