Snaptrap is the name of a fictional character from the Transformers series introduced in 1988. Turtler is an evil Seacon commander in the Transformers: Super-God Masterforce animated series. He should not be confused with Snaptrap, a similar character with an identical toy. 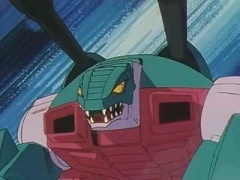 A new toy that is identical to Generation 1 Snaptrap. Turns from humanoid robot to robotic turtle. Forms the torso of King Poseidon.

A set of replacement labels for the Generation 1 Seacons.[2]