Transformers: Dawn of the Predacus

Transformers: Dawn of the Predacus is a work of Transformers fiction released at BotCon 2016.[1] It is set 30 years after the Battle for Autobot City and 300 years before the Beast Wars.[2]

In the last days of the Great War, Blades reports to Ironhide, Prowl and Silverbolt that Optimus Prime has died.

Decepticon generals Cicadacon, Ramhorn and Sea Clamp continue their experiments with transmatter and protoform technology when Tarantulas reports to them that Galvatron is dead. The commander of Decepticon Attack Squad 3 radios the generals that Galvatron and Optimus Prime have died and that the Decepticons have the advantage, but the generals order the commander to withdraw and await instructions. The commander agrees, but then orders his troops on anyways. The Decepticon generals realize their experiments in protoform technology have worked and they need as many Autobots and Decepticon alive to use it, so they order a cease fire. 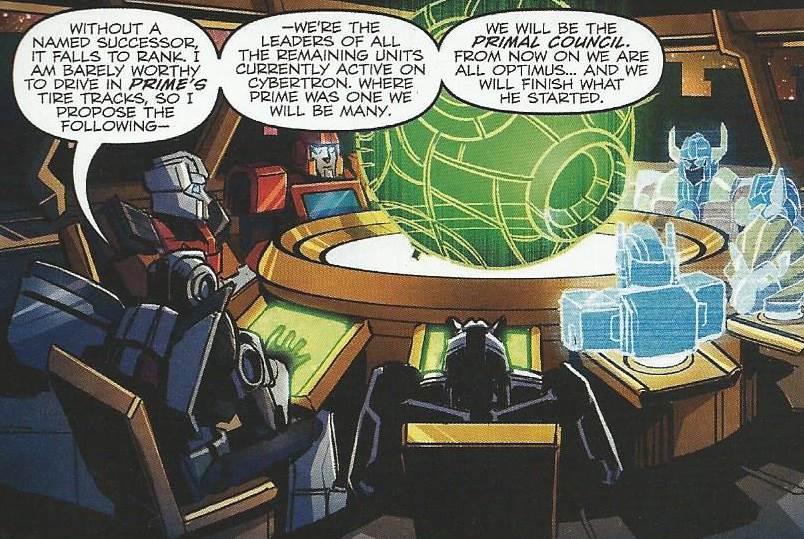 The Autobot High Council appoints itself the new Prime

The Autobot High Council meets at Nova Plenum where Prowl suggests that without an appointed successor for Optimus Prime they instead lead as a Primal Council. They decide to press the advantage of Galvatron's death to attempt get the Decepticons to surrender. The only surviving member of Autobot Unit-3 reports back that his unit, including Perceptor, are dead. Big Convoy, Lio Convoy and Tigatron are sent on missions while the survivor of Unit-3 is recruited to fill Perceptor's shoes in the Council's contingency plan. From the Unit-3 survivor the Council learn Perceptor found evidence of transwarp reactions. The Axalon with Optimus Primal, Ratrap and Rhinox is sent to do an orbital scan for the transwarp reactions.

At the site of the Omega Spaceport the Decepticon commander is told that Autobots approach. When Tigatron offers the Decepticons a peaceful solution to their conflict the commander declares himself "Megatron" and orders his Decepticons to attack. Predaking makes short work most of the Autobots, although Airazor is able to fend off attacks from Terrorsaur and Waspinator, resulting in the later being stepped on by the combiner. Megatron orders most of his troops to continue on to Nova Plenum while Predaking finishes the Autobots. Despite wanting to stay in combat with Airazor, she convinces Tigatron to leave the battle and return to the Council because they need him.

At Nova Plenum Tigatron returns and together with Ironhide, Prowl, Silverbolt and the Unit-3 survivor is able to form Magnaboss to fight of Megatron's Decepticons. As the transmatter rains on Cybertron the Decepticon generals arrive and runs Predaking through with his own sword... hoping word of his death will help bring peace to Cybertron so the generals have time to finish their plans to turn everyone into protoforms. As numerous Autobots and Decepticons all over Cybertron, including Inferno, are turned into protoforms Tarantulas reports to Megatron that Predaking is dead. Even with this news Megatron refuses to surrender. Ravage secretly shoots Megatron, rendering him unconscious. Cicadacon delivers the surrender of the Decepticons to the Autobot Council.

The Autobots and Decepticons sign a peace agreement, taking on new names and new allegiances while those turned into protoforms (including Airazor, Grimlock and Inferno) are placed in stasis pods in hopes that they can be restored one day. Megatron faces justice and downgrading for failing to follow orders. Cicadacon continues his experiments in protoforming and the design of Magmatron.