From WikiAlpha
Jump to: navigation, search
For other uses, see Tracer.

Tracer is a fictional character from the Transformers series. He was introduced in 1988 as one of the Targetmasters for the Autobot Scoop.

Tracer first appeared in issue #60 of the Marvel Comics Transformers series. Scoop wields Holepunch and Tracer during a series of fuel raids on Cybertron alongside the recently revived Grimlock, Jazz and Bumblebee. Scoop and his Targetmasters had a full page biogrpahy printed in issue #61.

Although the animated series stopped making new episodes in the US before Tracer was released, he appeared in animated form along with the other Double Targetmasters in commercials for the toys.

Animation from the commercial was used in the opening credits for season 5 of the Transformers, which retold episodes of earlier seasons. Tracer appeared in them.[1]

When the Generation 2 animated series was aired animated bits of the Generation 1 commercial with Tracer in it were edited into the episode "More Than Meets The Eye Part 1." [2]

Scoop and his Targetmasters did not appear in Dreamwave comics fiction but did receive a biography in issue #5 of their Transformers: More Than Meets The Eye series. 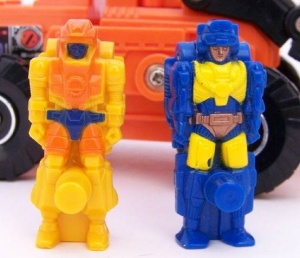