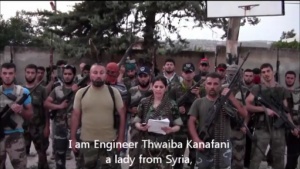 Thwaiba Kanafani is Canadian/Syrian engineer whose 2012 decision to volunteer to fight with Syrian rebels against the Assad regime triggered world-wide coverage.[2][3][1][4] Tom Coghlan, writing in The Times of London, described her as the female face of the Syrian revolution, in August 2012.[5]

Kanafani emigrated to Canada in 2002, after working in the Unite Arab Emirates.[3] She and her husband raised a family in Toronto.

In the months leading up to her decision to volunteer Kanafani described participating in social media discussions about the unrest in Syria, and the number of deaths of innocent civilians.[1] She described being encouraged to volunteer by her older brother. Her husband and children joined her, and established a home in Egypt prior to her travel to Turkey for military training.

The Free Syrian Army broadcast a YouTube recruiting video showing Kanafani surrounded by other fighters, where she announced she had joined the Banner of Damascus Falcons Troop of Aleppo Martyrs.

In October 2012 Armina Ligaya writing in the National Post reported on Kanafani's return to Canada.[6] She quoted Kanafani remaining committed to return to Syria. Kanafani had not served as a front-line fighter, after all, had not been called upon to fire her weapon. Her duties had consisted of committee meetings, visiting refugee camps, and other recruiting activities.

In 2015 the Toronto Star described Kanafani as having left the front lines after growing disillusioned.[7]