Thunderclash is the name of several fictional characters from the Transformers series. It was initially spelled with a space in 1992 as "Thunder Clash", all later uses have used the spelling "Thunderclash".

This toy truck was released in Europe as leader of the Turbomaster team. He did not appear in any fiction other than his pack-in catalogue comic. Because of his bright neon colors, Thunder Clash is often believed to be a part of Generation 2 - this is not the case; his Autobot insignia is clearly that of the Generation One design.

In issue #3 of the Transformers: Universe comic book Alpha Trion had computer screens viewing great Autobot and Maximal heroes from the past and asked Optimus Primal to choose several troops. Although Optimus Primal choose Depth Charge and Rhinox, one of the screens showed what appeared to be either Machine Wars Optimus Prime or Thunder Clash, which both share the same mold.

Thunderclash first appeared in Fun Publications fiction in the story "Wings of Honor." In the early day of the last great Cybertronian war the Eight Track was ordered by Autobot commander Magnum to recover the secret cargo of the Autobot ship Van de Graaff, which had been downed by unknown forces, before the Decepticons could gain the cargo for themselves. Crashing on the planet Beta-Nine the Autobots encountered a Decepticon Skyraider force led by Banzai-Tron. The Autobots were recovered and brought the cargo back to Magnum. They were awarded with the honor of becoming the first members of the Autobot Elite Guard.[1]

In "The Coming Storm" The Elite Guard Alpha Team and Strike Team did battle against a horde of ferrovorous bugs in one of Cybertron's city-states. Magnum then ordered the Strike Team to escort the Alpha Team to Space Port Bravo for their next mission. The Strike Team then reported to Magnum and Sentinel Major, who introduced them to the new Elite Guard Special-Ops Team, also called the Combaticons.[2][3][4]

In "Battle Lines" Thunderclash's Elite Guard squad reported to Magnum after the Combaticons killed most of the Guard. They attempted to show the Council that the Elite Guard was still functional, but arrived just as Optimus Prime was appointed the new commander of the Autobots.[5] When Decepticon forces lead by Deathsaurus ambushed the Autobots lead by Magnum, Thunder Clash had to save Magnum from Lyzack.[6] Thunderclash is among the Autobots present when Megatron attacks Iacon with his new weapon, Devastator.[7]

Art of Thunder Clash graced the cover of the Botcon Europe 1999 Souvenir Magazine, probably tying in to an article inside about European exclusive Transformers.

Thunder Clash was later recolored into Machine Wars Optimus Prime, changed slightly for US safety rules.
Although the toy was never produced, a repaint of Thunder Clash was planned and rendered in art for the Transformers: Universe line. Initially called Motormaster, then Menasor for trademark reasons, this repaint was black and done as a Decepticon.[8]

A recolor of Energon Rodimus, this toy is a Botcon 2009 exclusive.[9]

The name Thunderclash was used for the Mini-Con partner of Skywarp. He is described as an amoral smooth-talking weasel. He is very smart and has impressive firepower with his twin machineguns.

Unlike Skywarp, who seeks to prove himself based on his own merits and without utilizing favors from others, Thunderclash is an opportunistic parasite whose sole interest is self-interest. He offers assistance only to those whom he can take advantage of later, and all Decepticons know that accepting help from Thunderclash means they'll pay a heavy price later. It's unusual for a Mini-Con to wield so much power in the usually prejudiced Decepticon ranks, but Thunderclash is such a smooth talker that he's managed to convince almost everyone that they need him more than he needs them. One who hasn't fallen for it is Thunderclash's occasional partner Skywarp, who can't abide the Mini-Con and his greasy attitude Thunderclash puts up with Skywarp's negative comments because of the benefits of being associated with the feared warrior. It is believed that Thunderclash started the rumors that Skywarp earned his position because of Starscream in order to have some potential blackmail to better control his Dcpt partner. Subject is highly intelligent and possesses mid-level strength and endurance for a Mini-Con. He is an adequate pilot in his jet mode, and his twin machine guns are a devastating weapon in both modes. Subject is an acceptable combatant, but his real skills lie in being able to manipulate almost anyone he comes in contact with. His greatest asset is the amazing reach of his social network. Although he has many friendly contacts, Subject also has some resentful enemies. He is in constant danger of someone, like Skywarp, discovering his backstabbing and then taking vengeance against him.

Ramjet has a biography published in Dreamwave Productions More Than Meet The Eye Armada issue #3. 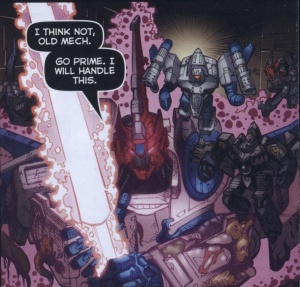 Ramjet and his Mini-Cons in Balancing Act

Thunderclash is one of Ramjet's Mini-Con partners in the Fun Publications story Balancing Act. He arrives with Ramjet, Nemesis Prime and the other Mini-Cons on the nearly empty planet of Cybertron where they attack Vector Prime, Sentinel Maximus and Alpha Trion. He later helps lead Dark Scorponok against his foes.

This toy was later redecoed into Micron Boosters Processor, Saber and Triac.[10]

The Armada toy was recolored slightly and released in a Toys 'R' Us Spring Value Pack along with Ramjet and the Air Military Team.

This Thunderclash is the evil counterpart of Generation 1 Thunder Clash in the Shattered Glass universe. He carries a plasma rifle and his shoulder-mounted missile launchers.[11]

He combines with Nightbeat to form the super robot Nightclash.

According to his Fun Publications biography Thunderclash replaced Hyperdrive as leader of the Elite Guard.[12]

A redeco of Energon Rodimus, this toy was a BotCon 2009 customizing class exclusive.[13][14]

A set of third-party labels from Captured Prey which reproduce the symbol on Shattered Glass' Thunderclash.[15]