The Show Must Go On (Transformers: Renegade Rhetoric)

The Show Must Go On is a fictional story in the Transformers: Renegade Rhetoric series episode 10. Written in 2015, it retroactively took place in an unaired second season of the Challenge of the GoBots animated series.[1]

The Renegades put on a show that brings the house down.

Dear Renegade Rhetoric, Besides C.S. Lewis, have you read any other human authors?

Cy-Kill: But of course! One cannot hope to conquer a civilization without some level of understanding. I was particularly impressed with your Machiavelli and Sun Tzu. Nietzsche, Marx, and Locke had some keen insights as well. And I had a rollicking good laugh over the antics penned by Gilbert & Sullivan. Why once we even managed to put on a production of The Pirates of Penzance as part of an elaborate scheme to rid ourselves of the hated Guardians once and for all.

Cy-Kill: Oh, it was the usual. Traitor learned that an eccentric and wealthy theater enthusiast was leaving his entire fortune to the best production of the season. That fortune included a mystical gemstone with incredible powers, originally owned by the ancient Roman thaumaturge Arcanus Maximus. I wanted to acquire the stone and so put on a show.

Inexplicably, the old fool preferred the Guardians' production. It was some impenetrable drivel by Kafka, though I must admit that the casting of Leader-1 as a giant cockroach was inspired. Naturally we grabbed the jewel anyway, but were much chagrined to discover that Arcanus Maximus was a fraud and that his stone was a worthless bauble. 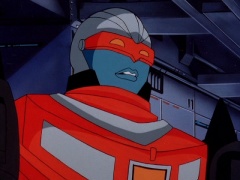 Snoop in Challenge of the GoBots

Cy-Kill: Oh, it was a sight to behold. Though I had had my heart set on the Pirate King, none of my troops could do justice to "Modern Major General," and so my hands were tied. Bugsie took the Pirate King role, with appropriate panache. Snoop did a passable Mabel, and her chemistry with Re-Volt's Frederic was, appropriately, electric. Or am I mixing a metaphor? Sparks flew, in any event. Literally. Crasher refused to play Ruth, but Psycho turned in a surprisingly good performance in the role. That left Twin Spin's serviceable Police Sergeant.

Needless to say, we brought down the house. Again, literally.

Christopher Colgin: Did Cop-Tur have a part?

Cy-Kill: Cop-Tur is an abysmal actor. It takes him ages to get off book, and he never seems to hit his mark.

He was, however, surprisingly adept in his capacity as stage manager.